Posted by admin in Helicopters on January 19, 2016

the record-holder helicopter, the helicopter equilibrist, «the night hunter», "opustoshitel" – what only this rotary-wing car did not receive epithets. On the tactical technical characteristics it does not have the equal. It is enough to tell that this helicopter is capable to carry out the aerobatic manoeuvres subject only to warplanes in air.

Mi-28 – the car of new generation of assault helicopters of the Russian army – becomes the hero of the next transfer of Alexey Egorov «Military acceptance», leaving on ZVEZDA TV channel. 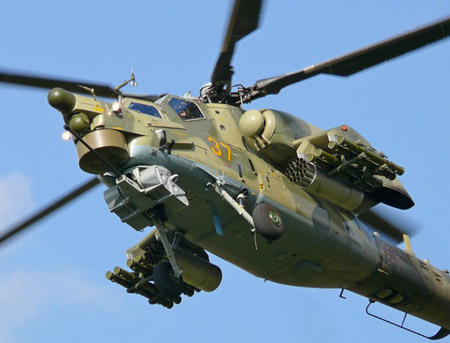 Maneuvers which are made by this car in the sky, strike even the experienced expert on air equipment. For example, back Mi-28 is capable to carry out movement on the same cruiser speed, as forward. The helicopter can carry out rotation round its pivot-center and thus continue … simultaneous movement at the set course! In the program «Military acceptance» this trick will be separately shown. By the way, figures of the pilotage, which helicopter pilots show in the sky, – not air bravado. It is a way of real antiaircraft counteraction, leaving from antiaircraft means of the opponent.

At all the yurkost of Mi-28 you will not call harmless air "circus actor". This helicopter – the terrible weapon of army aircraft, the most effective and, the main thing, dot support of land armies. He is ready to bring down the real squall of fire on the purposes. Mi-28 it is equipped with the whole set of the built-in shooting and gun arms, as a part of which – down 30-mm 2А42, (same it is established and on infantry fighting vehicles), four points подвеса uncontrollable rocket shells, 16 guided missiles, and also the class "Air-air" rocket. Not for nothing on classification of NATO Mi-28 gave the name "Hevok" (opustoshitel).

The compartment where there is a crew from two people, is protected by the reservation, and, besides, the car is equipped with the equipment allowing it to operate in any weather, at any time. By the way, for this reason Mi-28 also call «the night hunter»: to the name of such cars the letter of N is added.

Today this helicopter arrives on change to the legendary Mi-24 car. the 28th model has the improved flight technical characteristics. As experts speak, this equipment is capable to provide a priority of the Russian army aircraft for the next 10-20 years. 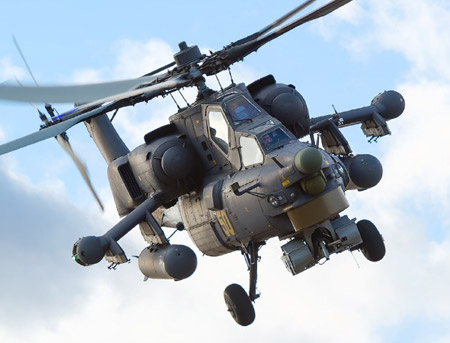 Mi-28 as it was already told, the virtuoso in air. By this car the known flight group "Berkuty" flies. Interestingly, what exactly "berkutovets" made first-ever "loop" (Nesterov’s loop). Now such bends carry out also NATO cars, but – by specially equipped helicopters. At us twirl a loop any of adopted Mi-28 can. It best of all speaks about real fighting potential of the Russian fighting vehicles.

Let out «The night hunter» at helicopter plant in Rostov-on-Don. Here assembly of Mi-26 – the biggest helicopter in the world is conducted, and still collect Mi-35. But Mi-28 call helicopter of new generation. It incorporated all the best that earlier was fulfilled on other models of rotary-wing fighting vehicles for the Russian army.

As the military representative on JSC ROSTVERTOL Vladimir Belyaev told, the special attention when manufacturing this helicopter is given to protection of crew. As protective elements ceramic tiles and aluminum бронеплиты here are applied.

«Such protection maintains heavy fire from the American machine gun "Volcano" of calibre of 20 millimeters», – the military representative emphasizes.

Thus the most widespread large-caliber machine guns – calibre of 12,7 mm at all jump aside from a covering of «The night hunter», as peas. On special technology the cabin glazing is executed also. Glass here too bronestoyky, it maintains hit of 12,7-mm of bullets. Actually by this helicopter it is created бронекапсула for crew (it here call "bathing"). Such protection is not present neither in the USA, nor in Europe, by one NATO helicopter… For example, the main competitor «The night hunter» – American "Apache" in Afghanistan forced down from the Soviet machine guns of times of World War II … 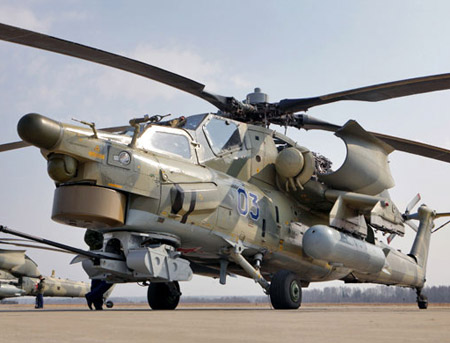 Fighting possibilities of the helicopter are under construction in a complex. It both high maneuverability, and protection of crew, both fire power, and counteraction to the high-precision weapon.

The last subject on Mi-28 is fulfilled especially. The set here is applied to withdrawal of rockets with thermal prompting infra-red пиропатронов. Each of them at a shot gives temperature of 2,5-3 thousand degrees. As a result the head of prompting of the rocket which has been let out on the helicopter, withdraws it on a false target.

Besides, by the helicopter the system of protection of the Vitebsk type is applied. According to the representative of JSC KRET (the company manufacturer of this equipment) Vladimir Mikheyev, a principle of work of system that will report to crew an onboard complex of defense which will prompt as it is better to be protected about any attack to the helicopter: to include a radio noise, to put the filter, to let out thermal traps or to make antiantiaircraft maneuver. And it becomes everything in an automatic mode.

For quite some time now Mi-28 became invariable participants of competitions of pilots of Armed forces of Russia "Aviadarts". During competitions the helicopter lets out a series of rockets on the land purpose then fulfills blow drawing from shooting and gun arms. By the way, the unit of fire of the helicopter makes 250 shots. The arrangement боезапаса provides selective selection both armor-piercing, and fragmental and demolition shells. The gun 2А42 beats on 4 kilometers and easily stitches through the steel reservation in thickness of 15 millimeters.

Thus the weapon «Night hunter» is on a mobile tourist’s fir-tree. Besides, computer "brain" can hold the purpose in перекрестье a sight even while the helicopter makes maneuvers.

«Our optics – a teplovizor, the chamber, a laser range finder – allows to provide use of the helicopter on moving targets in any situation», – Vladimir Belyaev confirms военпред.

And Mi-28 can shortly equip with the latest radar station providing the simultaneous circular review on 360 degrees. This equipment surpasses all modern helicopter radar in capacity and accuracy. Automatic equipment of management is capable to keep rigidly the car in «the set point» sky. Moreover, there is a function of automatic landing.

«The car feels distance to the earth and horizon level, many other parameters, all complex» are thus applied, – the test pilot of military representation Sergey Kotov speaks. 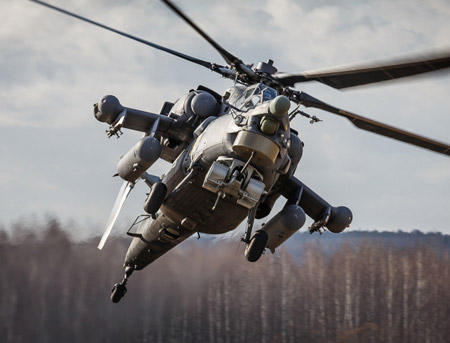 In general, to uniqueness of Mi-28 gives a number of elements. Among them – a helmet of the pilot-operator. It is considered that it the most technological of existing in helicopter aircraft. The established sensors can turn the weapon in the direction where the head of the pilot, but even … his look turned not simply! Thus built-in projectors issue information on the purposes, a program task, highlight mass of other figures. And still the helmet allows to conduct the helicopter blindly in the conditions of poor visibility. For example, in a fog the projector will show to the pilot the district such what it would look in usual weather.

«Electronic sight does not depend on weather conditions and time of day: the pilot on his devices always will have completely optimum image for piloting and a use of weapons», – Vladimir Mikheyev speaks.

The arrangement of engines became an innovation of Mi-28 also. They are established on each side a fuselage and can independently work.

«At refusal of one of engines there is a possibility to continue flight on other and to make a soft landing, having chosen a place for a landing», – Ruslan Le speaks the zamglavny engineer of JSC ROSTVERTOL. 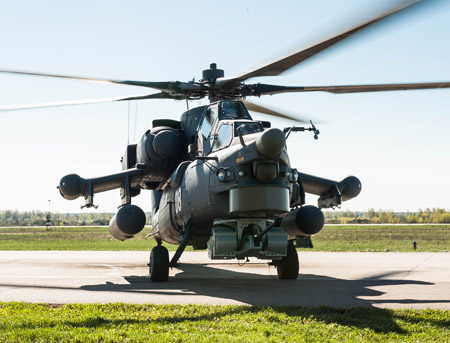 Survivability to the car add also blades: they are made not as before, of aluminum which broke at bullet hit, and from composite materials. As a result even the punched screw continues rotation that allows the helicopter to function, carry out a task, despite of fighting damages.

By the way, the screw on Mi-28 X-shaped such form also allows «The night hunter» to carry out the most difficult flight figures at great speed.

The new system of an emergency pokidaniye of the car crew became not less important know-how of «The night hunter». Earlier the pilot could jump out with a parachute only through a door that was often impossible – small height, helicopter torsion in falling, wound of the pilot … Now crew members in case of danger of death leave the padded car, "slipping out" from the places on a special ladder. By the way, parachutes at crew too not the simple. It is some kind of block of life support in which there is a raketnitsa, radio station, matches, fishing hooks, a powder which the inflatable boat blurs on water a bright spot and even.

Rescue of the car provides and not being cleaned chassis. It is executed in such a manner that at a crash landing "incorporates" a considerable part of energy from blow, protecting thereby crew.