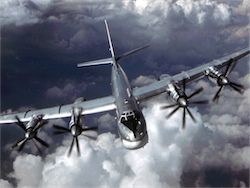 According to the chief of the General Staff, strategic rocket carriers of Tu-95МС started from the territory of Russia of 12 cruise missiles on the Syrian provinces of Aleppo and Idlib.

«As a result of airstrikes were destroyed headquarters «Islamic state» (the organization is recognized terrorist and it is forbidden in Russia), three warehouses with oil products and ammunition, plant about production of explosives, command point of terrorists, a workshop on production and repair of mortars, and also three large oil complexes and station of pumping of oil», – transfer to RBC of a word of Kartapolov.

On September 30 the Federation Council approved the address of president Vladimir Putin with a request to use the Russian military and air forces in Syria. Soon after that the Russian aircraft struck the first blows. Their purposes Moscow calls the objects connected with «The Islamic state» and other terrorist groups.