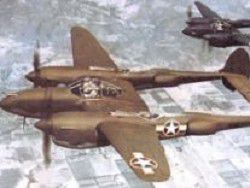 Morning for Stalin was saddened on November 8, 1944 by the unexpected report of the deputy chief of the General Staff of Red army of general Antonov on the tragedy which has occurred the day before around the Yugoslavian city of Nish: as a result of an air raid of the American allies 34 Soviet military personnel, including the commander of the 6th Guards shooting case of guard of lieutenant general Kotov were lost, 39 more people were wounded, to 20 cars with cargoes appeared are burned. Here so the gift by 27th anniversary of October revolution was presented by allies!

In the report it was reported: «… it is established that at 12 o’clock 40 minutes on November 7, 1944 over the city of Nish (northwest suburbs) the group of planes of the Laytning type (R-38, "Lightning") appeared a course of 120 degrees and at height of two thousand meters. Over airfield it was reconstructed in stretched right пеленг and, having gone down on 40-50 meters, started to shoot motor transport and the armies which were moving ahead on Nish-Aleksinats-Deligrad-Royan Road, operating on one and making on some calling along the road …»

As it appeared, the American pilots made machine-gun and gun, rocket and bombing fire on divisions of the 6th Guards shooting case of the 3rd Ukrainian front which was on march. By then resistance of Germans was already broken – their aircraft in air could not be. And command of the Mediterranean U.S. Air Force should know about it.

The Soviet commanders managed to understand not at once a situation. The former deputy commander of a squadron of the 707th assault aviaregiment of the 186th assault aviadivision, the Hero of the Soviet Union, colonel Nikolay Shmelev here is how remembered it: «Morning stood out on November 7 the serene. The city of Nish shrouded in an easy haze was decorated with red flags and banners. Pilots of our regiment harmonous columns left on a spacious parade-ground. Having accepted the official report, lieutenant colonel Shevrigin gave team:« At ease!». The deputy commander by a political part Sivud left on the middle of a system and ordered to the 1st and 3rd squadrons to be developed by flanks to the middle. Something was formed like the letter "P".

– «Frames!» – interrupted its someone’s exclamation. – Fascists dive on our airfield!

All, as if on command, turned the heads on the South. Because of mountains the big group of dvukhkilevy planes took off. Some of them already fell down in dive. Deaf gaps were heard. One by one on airfield the others dived also.

– A banner in a staff! – lieutenant colonel Lopatkin disposed.

– I understand nothing, – Sivud when we together reached the crack which has been dug out near a fence made a helpless gesture. – 40 planes! From where they could undertake?

And not only Vasily – all of us were surprised and puzzled. After all everyone knew that on our site at fascists was not and there is no such quantity of aircraft. And here – the whole armada! Suponin, Eagles and I, having got out of a crack, rose under a tree. To airfield – about two kilometers. We saw, how "frames" one for another continued to dive, storming parking of our planes … And here they it is already absolutely close.

– So same not Germans, it is Americans! Allies! – our pilots when by dvukhkilevy planes identification marks of the U.S. Air Force became clearly visible cried. Yes, it really were American "Laytningi".

In that morning the deputy commander of the 866th destructive aviation regiment of the 288th destructive aviadivision major Dmitry Syrtsov (later the Hero of the Soviet Union) was above mountain break. Visibility was fine, and he admired a never-ending stream of the infantry moving from songs under a wind band. «And suddenly in a melody of solemn sounds, – the major remembered, – the roar of planes rushed. From where they? That the opponent on this sector of the front cannot have no aircraft, absolutely precisely. So same American planes! That wanted by our allies? Such impression that they on the initiative cover our armies though needs in it are not present from air.

Meanwhile one group of planes formed a circle over the city, another began to come for bombardment. The road was shrouded in a smoke. Our soldiers swung red banners, white rags, signaling pilots that those attacked the allies. But bombs everything flied and flied down.

I rushed on airfield. To run already remained not so much as the six of the American planes was carried by low over the earth and brought down our flying-up fighter Yak-9. Without having reached KP, saw, how up the plane on duty комэска, the Hero of the Soviet Union of captain Alexander Koldunov (subsequently twice the Hero of the Soviet Union, the main marshal of aircraft, the commander-in-chief of air defense armies – the deputy minister of defense of the USSR), behind it – two more vigorously soared up. I ordered to lift all regiment, flew up also itself. Managed to repeat several times: «Some fire not to open! To submit signals that we the. But allies lined one more our plane. The pilot managed to jump out with a parachute …»

– Look, «ястребки» flew up! – it is pleased Dmitry Suponin (pilot attack plane Nikolay Shmelev supplements the story of the deputy a kompolka) pushed me sideways. – In air the link of our neighbors on duty really soared up. Having cleaned the chassis, fighters dispersed at the earth the maximum speed and with a candle got up. They engaged at once. The first attack each pair brought down on the enemy plane. To the aid of the brave four two more planes appeared in time, and also all regiment soon flew up. On a fuselage of one of them we noticed many asterisks and at once guessed: it is conducted by Alexander Koldunov (at that time it already destroyed about 30 planes of the opponent, and following the results of war – 46. – A.P.).

«Air fight inflamed everything stronger. Americans, having dumped bombs, at first tried to be protected. But, without having sustained an impact of our fighters, were constructed in "snake" better to cover each other with fire of forward machine guns, and began to leave towards the city. One of "Jacob" promptly dived from height on dvukhkilevy the plane and opened fire. the 37-mm a shell of its gun became torn in центроплане "Laytninga" and that, having flashed as a torch, crashed down on the earth. "Yak" slipped forward, but right there got under fire of other bomber. The machine gun fire got into a fighter cabin: having pecked a nose, it sharply went down and broke. Someone from our fighting friends was lost. In a throat at me запершило, on eyes tears welled up …

Pair of our planes promptly went on rapprochement with Americans … Sorcerers closely approached to leader "Laytningu" and began gestures to show that we the, allies. (Under Dmitry Syrtsov’s certificates, before Alexander Koldunov at a short distance shot at first one Yankee, then three more. – A.P.) Its conducted, lieutenant Victor Stepanov, vigilantly protected the commander. Obviously, the American at last understood gestures and with ascent went south. It was followed also by other "Laytningi". Having seen them to mountain top, the Soviet fighters shook wings and turned back».

Dry lines of the report to Stalin fixed approximately the following. Pilots of pair on duty, having noticed the American identification marks (the white five-pointed star entered in a dark blue circle), tried to point to Laytning planes to their mistake: approached closer, rocked from a wing on a wing, gave a signal «I am the plane» and drew attention to own identification marks. But in reply "Laytningi" started to attack our Yak-9, and on the next six flying up on cover attack on take-off was undertaken, at a separation from the earth. The commander of the 288th destructive aviadivision, watching a course of action from the earth and having obtained by radio data from the fighters that all Laytning planes have the American identification marks, gave the order: air fights not to conduct, provide only defense».

– One of the brought-down American pilots on a parachute went down near to the carriageway and was picked up by infantrymen. Brought it on airfield but as nobody could interrogate it, I ordered to send it in a staff of the 17th air army, – Dmitry Syrtsov remembers.

However in the report of generals of Sudts and Korsakov Verkhovnomu a word it was not told about repeated attack of Americans. «And meanwhile the thunder-storm, as they say, died down, – Nikolay Shmelev tells. – The regiment of attack planes was again constructed on a parade-ground. All hotly discussed the happened. It was difficult to believe that it was the mistake».

– Again «frames!» Still Laytningov group! – exclamations were heard. But this time already nobody ran to cracks. All were perplexed: really allies will open again on us fire?

«The second Laytningov group numbering too about 40 planes, passed through the ridge. And again the terrible picture repeated: planes one by one entered into dive and dumped bombs on a column of our armies. Being in Yaks air rushed towards. They were promptly carried by between "Laytningami", showing the identification marks. However not all Americans stopped bombardment and attack. Most "dull" should be convinced fire of machine guns and guns. Over festively decorated city with a roar the whole armada of planes was turned. Alexander Koldunov, as well as for the first time, was attached with the workmate Victor Stepanov to the leader of group of the American bombers and began to specify to it a way. Eventually "Laytningi" not so much at will, how many on coercion stopped a shturmovka of the highway and turned back».

The had losses impressed. Here that the archival document speaks: «as a result of defensive air actions by our fighters three Laytning planes were brought down. One plane fell in kilometer North to the west of Nish, the plane and the pilot burned down. Another fell in kilometer North to the east of airfield, the plane burned down, the pilot was lost. Both bodies are buried around airfield … The third fell in eight kilometers to the north of airfield, in mountains. The plane, on supervision from air, burned down completely. Two more planes which have been lined in air fight, with smoking motors left at low height on the southwest. At one of the lost pilots the identity card and an Italy map without a route and any notes …» is found

Losses were and at the 866th regiment. «Лайтнинги» brought down two Yak-9. One Soviet pilot burned down together with the plane, the second got severe wounds and was sent in hospital. One more our fighter, pursuing the American, got to a zone of fire of the air field anti-aircraft weapons and it was brought down. The pilot and the plane burned down. From the received wounds general Stepanov – the father of pilot Victor Stepanov died in hospital and the commander of a shooting division.

Article material «"Friendly" attacks of the American allies is used – it was ordered to Soviet pilots to answer fire with signals» Andrey Nikolaevich Pochtarev, the candidate of historical sciences.

Cases of "unintentional" attack of aircraft of "allies" were far not individual. It was possible to reflect attack of Americans even to the glorified Kozhedubu. It should be noted that it stood on ceremony with the Yankee much less.