Russia stumbles in the Syrian sky 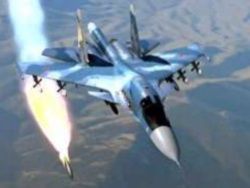 Rates of the Russian air operation in Syria, seemingly, decreased in comparison with peak values of recent time a little. If two weeks ago Russian made on 84 fighting departures per day, in the last days of their quantity was reduced, as well as many representatives of the American military man of department predicted.

It means that on the average Russian make on 55 departures per day, задействуя planes Su-24, Su-25, Su-30СМ and Su-34. Thus, rates of carrying out operation in air decreased. However figures correspond to that representatives of the Pentagon predicted. It is considered that on base in Latakia for Russian is available from 32 to 36 planes; means that in the presence of good material support they can make from 48 to 96 departures per day.

In the beginning the Russian aircraft surprised many, making to 88 departures in the day, however many representatives of VS of the USA declared that long support such rates it cannot. The matter is that Russian had in recent years no experience of use of fighting aircraft abroad, and besides, they have no well debugged system of the material support, allowing to keep rates for a long time. Actually, the majority of people of the Pentagon to which I managed to talk, assumed that logistic support becomes for Russian an Achilles’ heel.

As reported today USA Today referring to anonymous sources from the Pentagon, nearly a third of the Russian warplanes and a half of transport cars is in Syria on the earth. Probably, severe conditions of operations affect the Russian crews and on equipment.

Approximately the same is reported also by my own sources. However, in their opinion, material support – the main factor because of which rates decreased. They note that usually Russian planes in difficult conditions prove to be very not bad thanks to the strong design. Anyway, result such is that Russian do not hold out to indicators of forwarding forces of the Air Force, Naval Forces and the case of marines of the USA.

But there is also other factor which could serve its purpose. At the majority of the Russian planes sent to Syria – advanced, but quite old cases, or it is absolutely new samples, whose shortcomings come to light gradually and demand time for elimination. The old cars let even upgraded, break and demand frequent service and repair. It simply fact of life – and one of the reasons on which the U.S. Air Force so actively aspires to replacement of the oldest fighters (a good example to that is the Naval Forces advanced plane of USA F-14D).

But the same it is possible to tell and about new planes. While technicians will not understand feature and whims of the new car, yet will not find out, what details should be changed more often, rates of fighting departures at them happen awful. Such was with F-22 when it arrived on arms, and the same now occurs with F-35. Russia too has no immunity from a problem. It is necessary to tell that the most efficient Russian Su-34 bomber which, as well as the majority of the latest Russian models, is constructed in small amounts, in previous years had serious problems with repair and service that partly speaks low rates of production.

While it is unclear, whether Russia will use this possibility for reorganization of the system of the back and supply. If it arrives exactly so, it is impossible to exclude that rates of air operation will increase, when crews will accustom to new conditions, and the necessary spare parts will start to arrive in due time. Time will show, how Russian will cope with this task.

Deyv Majumdar – the The National Interest editor on military questions.