Posted by admin in Aircrafts on February 1, 2016 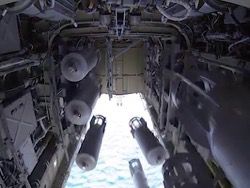 As the potential of the Russian military aircraft changed

Convincing demonstration of possibilities of Armed forces of Russia in the Syrian campaign allowed to speak about success begun in the second half of the 2000th years of military reform. For one and a half month of operations of VKS of Russia showed in business both the latest equipment, and the upgraded cars of old types.

Air power defines, in fact, all course of campaign. For time which has passed from the date of its official beginning – on September 30, 2015 – VKS of Russia made over 2000 fighting departures on more than 3000 objects of Islamists. Since November 17, after the order on strengthening of work of aviation group from base Hmeymim and attraction of additional forces, rates sharply increased: only for the last three days of VKS Russian Federation made more than 360 departures about 600 objects of terrorists became which purposes. What cars are used for this work?

Tu-160. The most powerful shock plane as as a part of VKS Russian Federation, and around the world – the mass of fighting loading can exceed 40 tons. In the Syrian campaign participates since November 17, 2015, it became a debut of this car used as a rocket carrier: Tu-160 is started on objects of terrorists by the latest H-101 cruise missiles and if in the first day start-up of rockets were carried out over the territory of Iran, on November 18 and 19 Tu-160 was attacked by the purposes from the territory of Russia: range H-101 reaches, according to some information, 5000 kilometers.

Tu-95МС. "Youngest" (physical age of cars from 23 to 35 years) option of the Tu-95 bomber veteran which for the first time has risen in air in 1952. As well as Tu-160, is used for start of cruise missiles, and too for the first time in history – only, unlike «the White Swan», uses not H-101, and their predecessors – H-555, conventional option of the H-55 rocket intended for drawing of nuclear attacks. Range H-555 makes about 2000 kilometers that also allows to strike the purposes from considerable distance (start-up were carried out over the territory of Iran) and with high precision: the system of prompting H-555, according to some information, provides a circular probable deviation (KVO) less than 20 meters that more than enough for a military unit it is powerful 410 kgs.

Use of cruise missiles for blows on objects of the terrorists deprived more or less distinct air defense, causes questions of expediency of similar squandering. Everything rises, however, on the places if to assume that use of the similar weapon pursues not so much practical, how many propaganda tasks. Russia convincingly shows existence of the global military potential providing defeat of the purposes worldwide. In a combination to statements the Ministry of Foreign Affairs of Russia that act of terrorism against the Russian A321 airliner on Sinai is considered on October 31, 2015 as attack to Russia, demonstration turns out very convincing. 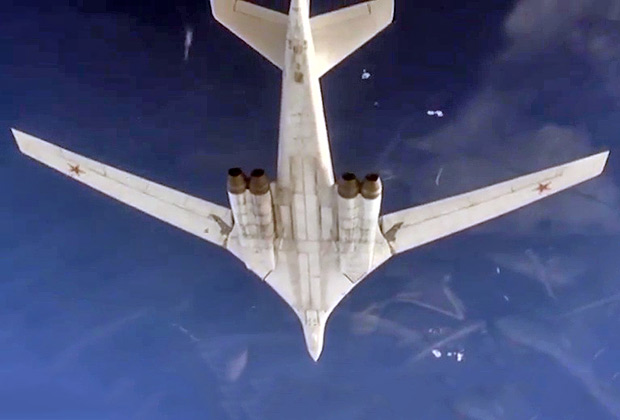 Tu-22М3. Use of this car if has propaganda character, where to a lesser extent, than his two more long-range colleagues. Tu-22М3, flying up from Mozdok, carry out rough if not to tell "black" work of war – fills up with bombs of camp of preparation of fighters, bases and warehouses. The uncontrollable air bombs which accuracy of hit is increased at the expense of modernization of an aim and navigation complex of the plane are for this purpose used.

At least the part of Tu-22М3 involved in the Syrian campaign, is equipped with onboard complex SVP-24-22 of the Gefest-IT company that allows the plane to increase accuracy of own bombing and to carry out a role of the leader for cars which did not manage to receive the new equipment yet. It should be noted that by Tu-22М3 are used with fighting loading quite limited for the possibilities which does not exceed six tons and, it is not excluded, will increase further. Tu-22М3 already have solid fighting experience: they participated in operations in Afghanistan, Chechnya and Georgia.

Su-34. Probably, the most recognizable plane of the Russian military aircraft today. An unusual form of a nasal part in a combination to the general silhouette, characteristic for the cars created on the T-10 base (Su-27), do it by the frequent hero of a photo and video. For Su-34 mass-produced after 2005, the Syrian campaign also became the first, short of one episode in «war 888» when two planes of this type were used for radio-electronic fight. Despite classification of Su-34 as front bomber this car with take-off weight to 45 tons and ability to carry out flights lasting many hours closely comes nearer on the potential to strategic cars.

For it the Syrian campaign also is the peculiar cut-away calculated both on opponents, and on potential partners, including possible buyers Russian aeromechanics as a whole and Su-34 who yet was not delivered abroad, in particular. Initially on air base Hmeymim six cars of this type, now there, judging by the data shown by the Ministry of Defence were put, there are four bombers, and eight more is planned to use from the territory of Russia – possibly, from airfields in the Astrakhan region. 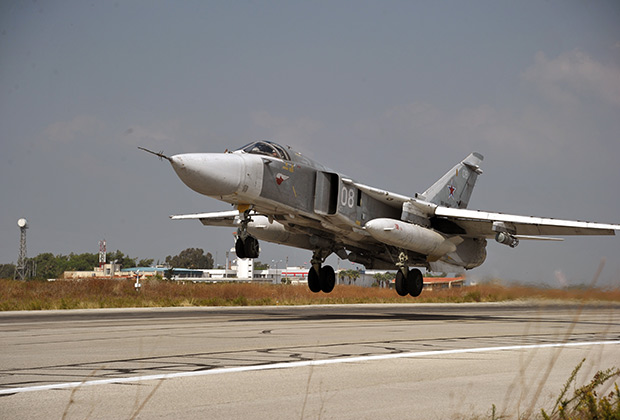 Su-24М. The veteran of the Air Force the USSR created for break at midget heights and supersonic speed in the back of NATO armies in the third world war, this plane participated in the local conflicts of different degree of intensity. Syria became a debut for the modernized Su-24M who have also received an onboard complex from "Gefesta" which equipment allows to increase sharply accuracy of hit even for uncontrollable air bombs. The used arms differ a big variety: from FAB-500M54 to H-29L guided missiles and corrected air bombs of different types.

Effective work of Su-24M proves utility of numerous doctrines of the last years when parts by these cars regularly worked at the remote ranges, flying, as well as new Su-34, on big distances – from Ural to the Far East, from the western part of Russia – to Central Asia, and so on. These transfers, which "shoulder" very often exceeds Syrian, allowed to fulfill the mechanism of maintenance of aviagroup in the separated airfields. These twelve cars carry out, probably, the greatest part of work of the Russian aviagroup in Syria.

Su-25СМ. The modernized option of a well-known attack plane of Su-25 a few years ago already was sentenced to fast write-off against notable losses of these cars which spoke their out-of-date design. The reputation of the vulnerable plane was strengthened also by war in the east of Ukraine where rebels of DNR and LNR managed to bring down some cars of this type used the Air Force of Ukraine.

In Syria twelve Su-25CM made about one thousand fighting departures without loss. For comparison: in «war 888» the Russian aircraft in total made about 400 самолетовылетов, both fighting, and noncombat, without transport, having wasted during this time four Su-25, one Tu-22М3 and two Su-24M. The quantity of departures on one loss for the Air Force of Ukraine in the summer of 2014 appeared even lower that quickly enough led to actually full stop of actions of the Ukrainian aircraft. 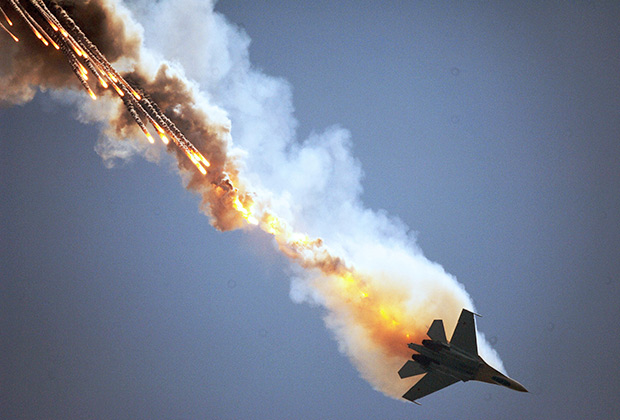 The reason of such decrease in losses in comparison with «war 888» and the more so with operations in Ukraine became, first of all, increase of fighting capacity of pilots thanks to the raised volumes of preparation, and also more intensive application of operated ammunition. allowing to minimize stay time in a zone air defense.

Su-30СМ. To Syria four cars of this type which main task, obviously, patrol of air space of a northern part of the country in order to avoid attempts to prevent actions of VKS of Russia is from Turkish warplanes were sent. At the same time there were also photos of these cars with arms "air surface", which is not surprising: the equipment Su-30CM allows to apply actually all ammunition "air surface" developed for front aircraft, and fighter pilots too should give the chance to cause a stir in the war where the main monasteries are collected by pilots of shock cars.

For Su-30 of all updatings which deliveries to foreign customers began in the late nineties, and for the Air Force of Russia – since 2010, this conflict also became debut. The most sold fighter of the last 15 years does not need advertizing, but also superfluous it will not be. Today Su-30 of different updatings are under construction both for export, and for VKS of Russia: in the next years Su-30CM can become the most widespread car of T-10 family in domestic military aircraft, having pushed aside outdate Su-27 of the Soviet construction and new Su-35.

Su-27СМ. Four upgraded fighters Su-27CM, used from the territory of Russia, were involved for cover of Tu-22М3 attacking the purposes in a northern part of Syria. Now as a part of the Air Force of Russia is more than seventy modernized Su-27 different from the initial car by the advanced radio-electronic equipment and wider nomenclature of arms. For Su-27 war in Syria – not the first: before the car of this type took part in several Post-Soviet conflicts, and also in Ethiopian эритрейской to war.

The part of the used weapon was already called higher. Complete transfer of the nomenclature would take too much time and places therefore we will allocate main issues.

1. The share of the used operated weapon sharply increased. In a combination to growth of accuracy of application of uncontrollable ammunition at the expense of improvement of the equipment of planes it allows one car to strike two and more purposes for one departure.

2. Both these a factor reduce time of stay of planes in a zone air defense, and also allow to operate in a night-time, by an order reducing probability of loss of the car and crew.

3. Obvious efficiency of use of the high-precision weapon allows to draw conclusions on insolvency of the developed myth about backwardness of Russia in development and production of this type of arms.

It, perhaps, the most important, though the least obvious part of shown fighting possibilities. As well as in the previous point, it is possible to allocate main issues.

1. Russia shows possibilities of effective maintenance of VKS group at a great distance from borders where the main limiting factor is the insufficient capacity of air base Hmeymim and absence of the second base which would be so reliably covered from the earth.

2. The intensity of fighting application reaching in other days of three departures aboard the plane is close to a technical limit for modern cars and allowed even with rather small number of group considerably to surpass in intensity of fighting application aircraft of the USA and their allies. It is provided at the expense of good preparation of the land personnel and command structure of VKS that proves efficiency of the military reform carried out in Russia including and reform of military aircraft.

3. The Russian aircraft for the first time in history works in continuous interaction with the pilotless devices providing additional exploration of the purposes and information transfer in real time, and also with digital satellites of photoinvestigation that sharply increases efficiency of detection of the purposes and productivity of attacks.

To do global conclusions while too early. However already it is now clear that the unique force to which it is meaningful to compare potential of VKS of Russia, are military and air forces of the USA. All other at the best challenge the third place – with considerable backlog from the second.