Posted by admin in Aircrafts on February 2, 2016 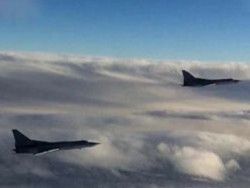 This week it was considerably strengthened according to Vladimir Putin’s order.

Before the pilots participating in operation of punishment, it is necessary to destroy a task control systems, material resources of fighters, objects of military and oil and gas infrastructure "Islamic state" (forbidden in our country). The quantity of departures is increased, strategic bombers and planes of distant aircraft are involved. It is dumped already one and a half thousand bombs. From the sea cruise missiles let out the Navy ships.