Posted by admin in Military on February 3, 2016 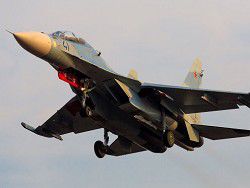 «The aviation industry, except for some problem positions, successfully executed state defense order (GOZ) for 2013 both on skilled design works (ROC), and on deliveries in armies of aviation equipment and arms. In total Air Force of Russia received more than 50 planes, including modern Su-30CM, Yak-130, Su-35C, MiG-29К, and more than 100 helicopters – Mi-28H, Mi-35, Mi-8AMTSh, Ka-52», – reported the Chestnut to the Aviasoyuz magazine. It explained that the reached results «confirmed expediency and timeliness of acceptance of military industrial complex of the decision on creation of councils on branches of OPK and to the main directions of development of arms and military equipment».

As to problem positions, the Chestnut carried questions of ensuring production of fighting aviation complexes to them «modern and high-quality devices, units, avionics and engines». Consideration of these questions as he reported ARMS-TASS, is submitted for the next meeting (after May 15) Council of military industrial complex for aircraft industry. According to the Chestnut, «with a view of increase of a practical orientation in Council activity» carrying out exit meeting is planned for July in State Research and Development Institute of Civil aviation, and in November – in TsAGI of N.E.Zhukovsky.

«Is defining 2014, I would tell etapny, in a cycle of performance of the State program of arms of 2011-2020 and planning of this program for 2016-2025», – the chairman of the board of military industrial complex reported.