Posted by admin in Aircrafts on February 6, 2016 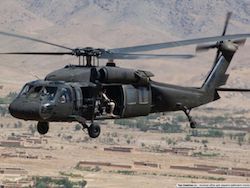 Slovakia approved purchase of nine Sikorsky UH-60 Black Hawk helicopters at the Ministry of Defence of the USA for 261 million dollars to replace with them Russian Mi-17.

Earlier in the special message the Ministry of Defence of the USA was said that presumable cost of the contract can make 450 million dollars.

Besides deliveries of helicopters the contract includes delivery of spare parts, and also the equipment, including communication systems and the navigation, special transponder and so on.

As a part of the Air Force of Slovakia – 10 military transport Mi-17 helicopters of the Soviet production which were put in the late eighties.

UH-60 Black Hawk – the transport helicopter of production of the American company Sikorsky Aircraft. It is made since 1974.

Mi-17 it was created on the basis of the Mi-8 helicopter, and in production since the beginning of the 1980th years.

In November, 2013 the Pentagon refused to buy Mi-17 lot at the price of 23 million dollars apiece.