Relatives of victims in A-321 Ukrainians arrived to St. Petersburg

Posted by admin in Aircrafts on February 7, 2016 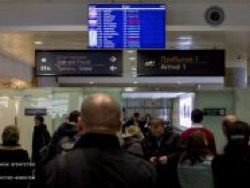 The first relatives of citizens of Ukraine which was lost as a result of crash of the Airbus 321 plane over the Sinai Peninsula, arrived to Petersburg. The consul general of Ukraine reported about it in Petersburg Lesya Lozinskaya.

«The consul of consulate general was in the airport and met the plane. At the same time information on, whether there arrived bodies of the lost citizens of Ukraine, will be provided after carrying out the corresponding procedures. Now bodies are delivered in the central mortuary of the city for carrying out examination and in a crematorium for procedure of an identification of bodies by relatives», – reported Lozinsky to TV channel «112 Ukraine».

It added that the consulate general keeps in contact with operational staff of the Ministry of Emergency Situations in "Pulkovo" and promotes relatives of victims. During stay in Petersburg they will be accompanied by the staff of consulate general.

After an identification of victims and carrying out other procedures of a body will transfer to relatives, the consul general told.

Let’s remind, the Airbus A321 plane of Metrojet airline ("Kogalymavia") was wrecked on the Sinai Peninsula in Egypt on October 31. The airliner onboard which there were 224 persons, including four citizens of Ukraine, carried out flight from Sharm el-Sheikh to Petersburg.

On Sinai, on a place of crash of the aircraft, rescuers work. Cairo put forward a preliminary cause of the tragedy – technical malfunction of the plane. Besides, the version of act of terrorism is considered. Now interpretation of black boxes is conducted.