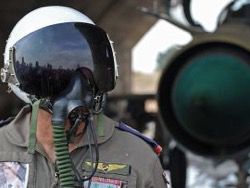 The introduction of Russia in the Syrian civil war surprised the West as anybody, obviously, did not expect a similar step. As, unlike Ukraine, speech does not go about the hidden operation, today it is possible to make to itself quite exact idea of nature of military participation of Russia in this Middle Eastern country. Thus attract attention two things: use of the Russian armed forces is effective, and it is directed first of all on stabilization of an existing mode.

The American and German research centers which within several last weeks estimated the Russian military operation, specify that its scale is represented smaller, than that influence which it renders on fields of battles. The basis of the Russian forces in Syria is made by aviation group into which strike fighters, attack planes, fighting helicopters and prospecting bespilotnik enter. At the beginning of operation as a part of the Russian group about 34 planes and 12 helicopters were.

But as the group is just formed, the number of planes and helicopters can be increased. In any case it is a question of the planes, capable to support operations of land forces. Thus, the Russian aircraft is used for support from air of armed forces of the Syrian mode and its allies ("Hezbollah", the Iranian guards of revolution, a Shiite militia from Iraq). The Russian group is strengthened by marines battalion (by an assessment, about 600 people) at the disposal of which there are armoured troop-carriers, tanks and artillery.

It is not enough raids on terrorist group «Islamic state»

Actions of the Russian group consist generally of the air raids, which Russian began on September 30. As far as we know, the most part of airstrikes during the first phase were undertaken in the North and in the west of Syria, first of all on space from the province Latakia to Idliba, and also in provinces Homs and the Boor. There are some of number of the strongest opponents of the mode which actions led to certain losses in Assad’s army. However it is a question mainly not of forces of terrorist group «Islamic state», and about Assad’s other opponents, including about those groups which were prepared and armed with the American secret service of CIA. And raids were carried out to the provinces of Aleppo.

The Russian planes made in the beginning from 20 to 30 fighting departures in day, during each of which by existing estimates to bombing were exposed from 10 to 12 purposes. The Syrian military and air forces which have in recent years considerable losses, carry out, possibly, support functions. It is obvious that the quantity of the fighting departures made by the Russian group, recently constantly increased. The Russian Ministry of Defence at the end of October reported about commission of 71 departures in 24 hours during which were subjected to bombing 118 of «the terrorist purposes». By the American estimates, in some days Russian made nearly 90 fighting departures that comes nearer to recent average values of operation «Congenital determination» (Inherent Resolve) within which Americans put air strikes on «The Islamic state».

Whether Russia land energies will direct?

The American military are under impression of actions of Russian which among other things use the whole set of high-precision ammunition and uncontrollable bombs, including intended for destruction of the strengthened bunkers. The Russian operation is perceived also as demonstration of abilities of the Russian armed forces which during war with Georgia showed low efficiency and after that were modernized. Especially made of the water area of the Caspian Sea the volley with use of cruise missiles on the purposes in Syria, is considered the proof of remarkable technological progress of Russian though four of them and fell to territories of Iran.

One of aspects which involves in itself more and more attention, surface-to-air missile systems which Russia placed in the territory of Syria are. In interaction with the multi-purpose planes located there they can be used in fight against planes and rockets of the opponent. As any of insurgent groups does not possess similar types of weapon, these systems in Syria are used only for protection against external forces. In this case it is a question of the United States, about other participants directed by the United States and directed against «The Islamic state» coalitions, and also about Israel. Russia, possibly, in a condition to create an umbrella over the area of action of the Syrian armed forces and their allies. And such step would be the desired help for Assad as the Syrian system of antiaircraft defense was damaged during operations and it is considered weakened.

It means that the alliance headed by Americans, possibly, will face restrictions in the North and in the west of Syria. Military operations should make a reservation now with Russian. Only American planes with the lowered radar-tracking visibility could be used here against the will of Russia. And the Israeli military and air forces cannot strike blows in these areas any more to prevent transfer of the Iranian weapon to Lebanese "Hezbollah" as it sometimes occurred in previous years.

Difficultly to itself to present, that Russia unexpectedly began to counteract the ally to Iran in this question.

While remains not clear, whether Russia wants to begin operations and on the earth. While, according to the experts, the battalion placed in Syria in any case is capable to protect the Russian base in airfield in Latakia. Messages that some offensive operations of the Syrian mode are supported by means of artillery however arrive. For more large-scale actions the Russian contingent, apparently, is still too small. If Russian make the decision on participation in land operation then it will be necessary to direct there, at least, the whole brigade (approximately from 3 to 5 thousand people).

To exclude similar option it is impossible, as Russian can and by air, and on the sea to deliver there materials and soldiers. In Latakia they prepared housing for 2 thousand military personnel. Logistic expenses made by Russia allow to assume that Russian count on long stay in Syria, if not on the constant. The attention of Americans was not escaped also with that, besides big field-kitchens, to the area of carrying out operation dancers and singers for mood maintenance at soldiers were delivered.