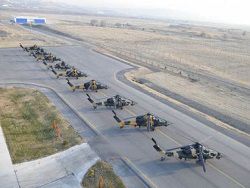 The Turkish company TAI transferred to land forces of Turkey the first party of shock T129A helicopters, reports Jane’s. Delivery of cars took place on April 22, 2014. Which number of helicopters was transferred to Turkish military, is not specified. Earlier the Ministry of Defence of Turkey got nine T-129A. Judging by the photo published by land forces of Turkey, such number of cars was delivered to military.

In total the Turkish Ministry of Defence intends to get 50 shock T129 helicopters in more perfect version B. The cars which have been already put in armies, will be upgraded late. Initially delivery of T129A was planned to begin in the middle of 2013, however this term was shifted for later time. The technical malfunctions found during tests of helicopters became the reason of transfer of terms.

Development of the T129 helicopter is conducted in common by the TAI company and the Italian AgustaWestland. The first flight of the car took place in September, 2009. Exact characteristics of the helicopter are not known. According to unconfirmed data, it can gather speed to 270 kilometers per hour, and its fighting radius will make 561 kilometers. T129 will be armed with a 20-millimetric gun, gun containers with machine guns of calibre of 12,7 millimeters and rockets of calibre of 70 and 81 millimeter.

As a part of aircraft of land forces of Turkey of T129B it is planned to use on a level with shock AH-1P/S/W helicopters.