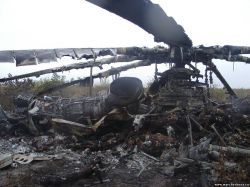 Near Semyonovk’s village rebels within one day brought down three helicopters of the army aircraft, taking part in retaliatory operation against inhabitants of southeast regions of the country.

For the past day, according to the city authorities, in hospitals of Slavyansk 11 wounded, including peace citizens in total arrived. It are the people who were injured during shellings of the city whom the Ukrainian security officers will see off. Also, as it is reported, they fire from howitzers on Thermal power plant in Nikolaevka near Slavyansk. If the thermal power plant is destroyed, without an electricity remain all North Donetsk and a part Lugansk areas. Meanwhile, in these regions the present authorities of Ukraine partially close border with Russia. The decision to suspend work 8 of 32 check points is made. Thus, the people who are actually living in a state of siege, deprive of the last possibility to find a shelter in Russia.

"The situation intense, is not present work, gardens, schools do not work. On June 1 destroyed by bombing our garden, we have no place to go now, the shell got to our group. Situation heavy. We did not leave, we still while remain here, we have to go", – the inhabitant of Slavyansk Natalia tells.

"Bomb and day and night. It is impossible to sleep. Today, of course, at night it was silent in the morning surprisingly. And usually from the half-sixth, from five o’clock start to bomb. Both in the afternoon, and in the evening. Both from helicopters, and from planes. The food vanishes, food do not deliver, shops almost empty", – the inhabitant of Slavyansk Svetlana tells.

Meanwhile, to Rostov-on-Don from the besieged Slavyansk the seriously ill patient the eight-months child is delivered. The boy is connected to the medical ventilation apparatus, together with it to Rostov mother and the sister arrived. From the airport реанимобиль delivered the child in the Rostov children’s regional hospital.

Meanwhile, in the Red Estuary of Donetsk region occupied on the eve of so-called national guard and "Right sector", fighters go on houses in search of participants of a militia. At locals check documents, force to show hands: look for the traces remaining from use of the weapon.