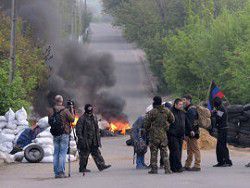 Four persons who could shoot from PZRK on military helicopters near Slavyansk – the Ministry of Defence are detained.

Within carrying out anti-terrorist operation on Friday four persons suspected of implementation of firing from mobile surface-to-air missile systems on helicopters of Armed forces of Ukraine near Slavyansk were detained, reported in the Ministry of Defence of Ukraine.

"As a result of carrying out actions within ATO on a side post of separatists near Slavyansk 4 people who roughly and made shots from PZRK on VSU helicopters" are detained, – the adviser of the Minister of Defence Yury Povkh on air of TV channel "112" told. According to him, at present with detainees, according to the current legislation, necessary events by the relevant power structures are held.

As to the kidnapped pilot, according to the representative of the Ministry of Defence, even before arrival of special troops of one of the wounded pilots saboteurs managed to grasp. "They actually waited on a place of emergency landing of the helicopter. The place of stay of the officer is now established and as far as we are informed, to it operation in one of medical institutions" is now carried out, – he added.

As it was reported, in Slavyansk two military personnel of VSU was lost, is some more wounded as a result of attack of two Mi-24 helicopters which carried out air patrol. Besides, in Slavyansk the armed persons fired at the helicopter of the Ministry of Emergency Situations which arrived into place with a brigade of physicians for assistance and evacuation. One of physicians is wounded.