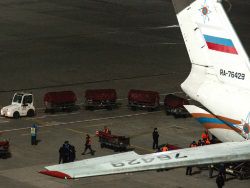 Two planes of the Ministry of Defence of the Russian Federation delivered to "Vnukovo" more than 40 tons of luggage of the Russian tourists from Sharm el-Sheikh and Hurghada.

"In the Moscow airport "Vnukovo" two Il-76 planes of military transport aircraft of MO Russian Federation from the airports Sharm el-Sheikh and Hurghada delivered more than 40 tons of luggage of the Russian tourists from 19 flights", – on it informs RIA Novosti news agency referring to the Ministry of Emergency Situations of Russia.

Earlier today the Deputy Prime Minister of the Russian Federation Arcady Dvorkovich told that return of Russians from Egypt goes according to the schedule. On hundred flights 25 thousand people are already transported. Thus all luggage is planned to take out from the country to 30-35 boards.

Russia suspended flights to Egypt due to the need to adjust in this country due level of safety of an aircraft service., In turn, it is recommended to tour operators to refrain from sale to Russians of permits to the Arab republic.