Great Britain will buy 138 fighters for blows on YOKES 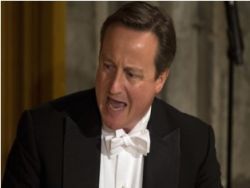 Great Britain will buy 138 invisible fighters for blows on «The Islamic state» (YOKES). About it the The Sunday Times newspaper on Sunday, November 22, was reported by the chancellor of treasury of the country George Osborn.

For these purposes it will be spent 12 billion pounds sterling (more than 18 billion dollars). The concrete model of planes is not specified.

According to Osborn, purchase of planes will make Great Britain the military power second after the USA and will allow to fight from YOKES and other extremist groups.

As approves The Sunday Times, Great Britain can put airstrikes on YOKES in Syria in two weeks. It happens in case the British parliament will vote for granting to the government of such mandate.

Vote in the House of Commons on the matter will take place within two weeks. The first fighters can already begin air attacks on terrorists in some hours after bill approval.

The prime minister of Great Britain David Cameron supports that along with participation in bombings of positions of YOKES in Iraq the British military and air forces performed operations and in Syria. However earlier it did not meet with parliament approval.

At the beginning of November the chairman of committee on the international affairs Crispin Blant declared that in it causes fear that fact that the similar decision would be accepted in the absence of the long-term plan of a victory over YOKES and completion of civil war in Syria.

In Committee noted that the government should answer fundamental questions of rather offered airstrikes – including on their legality, considering that approval of the United Nations will not be. Also it is necessary to pay attention to, whether will meet similar measures support from the region states, including Turkey, Iran, Saudi Arabia and Iraq. In this regard the committee did not recommend to submit in general a question of expansion of military participation of Great Britain in the Middle East for discussion of the House of Commons.

In September, 2014 the British parliament approved air strikes on positions of YOKES in Iraq, but not in Syria. Sending of the contingent of land forces also is not provided.

According to research of the consulting company ComRes, 46 percent of British act pro drawing of airstrikes on YOKES with or without approval of the United Nations, 32 percent of respondents spoke against air attacks on terrorists.

Since September 30 the Russian military space forces perform operation against terrorists in Syria. With a request for rendering of the military help for counteraction to "The Islamic state» (the terrorist organization forbidden in Russia) to Moscow Assad addressed. Besides Russia which supports from air of the Syrian army, blows on fighters put forces of a coalition led by the USA.