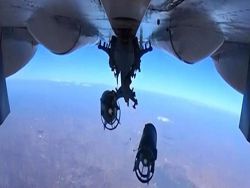 Russia will strengthen blows in Syria because of act of terrorism onboard A321. Vladimir Putin promised that criminals will understand – punishment inevitably.

The president emphasized that Moscow will operate under the Charter of the United Nations where the right of the countries to self-defense is registered.

On November 17 the head of FSB Alexander Bortnikov declared act of terrorism by the real reason of crash А321 in Egypt. According to him, onboard the liner the bomb worked.

Examination found explosives on fragments of the liner and luggage, the head of FSB explained.

On October 31, 2015 on Sinai the A321 plane of Metrojet airline ("Kogalymavia") was wrecked. The board followed from Sharm el-Sheikh to St. Petersburg. 224 persons were lost.