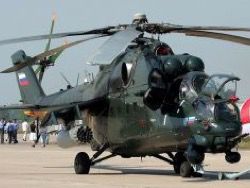 During the international aerospace salon "Dubai Airshow-2015" passing in the United Arab Emirates potential foreign customers stated interest in acquisition of the most different means of aircraft and air defenses made by the Russian enterprises. So, representatives of Bahrain stated interest in acquisition of Mi-35 helicopters. RIA Novosti news agency provides the statement of the interlocutor of agency:

The stand of "Rosoboronexport" was visited by delegation of the Air Force of Bahrain where they showed interest to the Mi-35 helicopter (…) They received all exhaustive consultations on technical characteristics and fighting use of the helicopter. As a whole, representatives of Bahrain expressed desire to develop this subject in the future.

Whether «this subject» before signing of contracts with Bahrain will be developed, – representatives of "Rosoboronexport" yet do not report.

Mi-35 – Mi-24 helicopter modernization. The helicopter is intended for fire support of land forces during carrying out operations, destruction of armored machinery of the opponent, and also for carrying out evacuation actions. Besides, the helicopter is capable to destroy some types of air targets and to be applied as the landing and transport car.

"Rostekh’s" head Sergey Chemezov noted that foreign representatives state interest concerning acquisition of the air defenses latest systems. In particular, it is a question of interest Saudi Arabia in acquisition of the Triumph S-400 complexes. It is emphasized that on delivery of such complexes Russia signed the contract only with the People’s Republic of China