The helicopter in Moscow did not fall, but the joke was successful 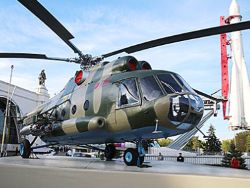 The owner of service of statistics of LiveInternet Herman Klimenko argues on, whether it is necessary to punish the joker and how to be mass media which in a pursuit of a rating reprint fakes

No helicopter on Mira Avenue in Moscow fell: it was the unsuccessful joke of one of Internet users, reported to "Interfax" in the capital Ministry of Emergency Situations. Earlier today a row of mass media reported about falling of "Mi-8T" on the doubler of Mira Avenue.

After this also the Rosaviation disproved messages on a crash of helicopter. The representative of department specified that aviaincident with Mi-8 helicopter really took place, but in Yakutia. The rotary-wing vessel made rigid landing in Lensk the area therefore two persons suffered. The car carried out flight on a route «Mirnyi – Chisel No. 3 – Mirnyi».

In the Ministry of Emergency Situations across Moscow declared that false information about a crash of helicopter on Mira Avenue the LifeNews TV channel took from a portal «Yandex. Jams». The operative group into place left, found nothing. Business FM discussed false news about a crash of helicopter with the owner of service of statistics of LiveInternet Herman Klimenko.

How there are such hearings and why they so promptly extend also many are perceived as the truth? Herman Klimenko: We, unfortunately, now are in an era when everything the criticism when everything visitors govern governs, and the temptation of the editor-in-chief of any edition after all to leave the first, and it is very important history, that is it to collect both a traffic and attendance, and reputation still, that is we live during an era of ratings, and, respectively, the otmetochka that the first reported, sometimes plays a bad joke. We remember history with Yanukovych’s funeral when news of hour per 4 mornings jumped out, and, there was no yet a denial, its time four buried. As the history today’s, of course, says that in our information field the classical rule of two confirmations at all does not work because all mass media were moved in general. They, of course, everything referred to the primary source, but it is clear that anybody precisely knew nothing, that is in this plan it, of course, history about that our mass media are in rather vulnerable position for information trolling if it is possible to call so. At us events in Ukraine led to that at us sharply the share in social networks of consumption of news very grew, and news is already disproved, it can be disproved in five minutes, in this case, in my opinion, through ten began to disprove this news, but it went already to lead independent life in networks, the traffic grew literally by mass media for 30-40 % because nevertheless began to transfer each other, and here this chain of distribution to Facebook, "Schoolmates", "VKontakte" worked for all 100 %. That is whether it is possible to say, what here how in show business, it is not important, what speak, the main thing – that told? Herman Klimenko: There is all according to such scenario. According to the version of the Ministry of Emergency Situations, it there was an unsuccessful joke. How you consider, whether it is possible to expect growth of number of similar jokers? Herman Klimenko: The problem is that it is absolutely similar to a joke that explosion prepares at the station when school students joke. There is rather rigid criminal liability if the person is found. In this sense and there are any procedures as far as it is a joke was ill-intentioned, it is necessary to deal with it, but here I would like to pay attention what in principle to verify this news would be as easy as shelling pears for all mass media because Mira Avenue is Moscow, it in availability of all webcams, in availability of all calls of phones, but nevertheless, mass media in a pursuit of ratings, as show business, you correctly absolutely told – if only to the first to tell. Here, of course, it would be healthy, if mass media did not pursue ratings, but we know that they have ratings it is equal money. And if to take such ill-intentioned jokers who try to extend on the Internet, to lift a certain wave, whether it is possible to calculate and punish, first, somehow them, and secondly, whether the administration of online services should watch reliability of similar information somehow or not? Herman Klimenko: First, the administration of online services cannot technically define that for news is authentic, and that for news is doubtful, because it is possible to carry out some analogy to the Chelyabinsk meteorite when literally in five minutes after meteorite falling all of us knew that occurred, in five minutes video was uploaded. It is very important that we now live in so accelerated time, it is simple at the time of when there were newspapers, there was an event, everything was rechecked, imposed, prepared in number if something was impossible – the circulation was destroyed, the following was printed. We live now online, and it is clear that similar events, first, it, certainly, a shame our, especially Moscow, journalism. I do not know, whether has sense to punish, understand or it will be possible to find the one who organized it, but that someone should receive «A silver galosh» for nonprofessionalism. After all, if the primary source is found, whether punishment waits for it? And whether it is necessary to look for it? Herman Klimenko: It is necessary to look for. Everything depends on how it occurred if it occurred maliciously, punishment if the person simply wrote in the Facebook or LJ that it occurred, and mass media перепостили that without check rather difficult, seems to me, here, generally certainly, wines of professional mass media which were moved on sensation is required and did not provide news check because here obviously there is no ill-intentioned history. The ill-intentioned history is when the station mine, and this history, most likely, really appeared a joke, a fake which on the Internet all day long there is a lot of, and, certainly, any journalist should be able to check previously at least about what there is a speech.

And here is how to feykovy news about a crash of helicopter reacted in social networks:

«The helicopter was, but did not break. And already departed. But pictures any are not present. Strange».

«It was the helicopter on the Stealth technology – invisible».

«Already descend somebody on Mira Avenue, 125 and look, there is there a helicopter or not».

«Firefighters here, police here, only the helicopter are not present))) Perhaps UFO?»

The investigatory committee of Russia asks mass media not to use information from so-called feykovy pages in social networks. Journalists, referring to Twitter SK, wrote that department allegedly confirmed rigid landing of the helicopter on Mira Avenue. «With a fake we will deal, and some do not need to check information source. Respect itself and the readers», – it is told in the message of Investigatory committee.