Two persons were lost at helicopter crash in California 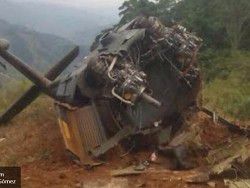 At helicopter crash in the south of California two persons were lost. Crash occurred at city airport Carlsbad.

On 5 videos published by the Fox channel it is possible to see that helicopter which has already landed on VPP starts to rotate uncontrollable round own axis, several times touches the earth, thus separate parts then disappears in a dense cloud of a smoke fall off it.

Anybody from the airport personnel on the earth did not suffer. To the identity of victims are established, the airport Makklellan-Palomar is temporarily closed for elimination of consequences of accident. Representatives of law enforcement agencies, Federal management on aircraft and National bureau of safety on transport of the USA are engaged in investigation of the reasons of incident.