F-35 it is called the worst American fighter 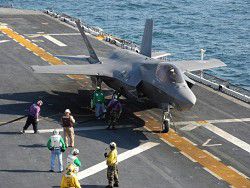 The American fighter of the fifth generation of F-35 Ligthing II got to a rating of the most unsuccessful fighters of the USA, made by the military-political The National Interest edition.

This plane is issued for years later, than it is necessary, the budget on its creation is unreasonably inflated, and the car will not combine all characteristics promised by designers, writes the edition. It was supposed that multipurpose F-35 will replace at once some types of highly specialized planes, the dearest Jack of all trades who is not the expert in anything in practice turned out. Besides put in F-35 requirements were made, when future threats were not clear – the plane which is not answering with a modern call as a result turned out.

Together with Ligthing II Bell P-59 Airacomet got to "black list" – the first attempt of the USA to create the jet fighter. The turned-out plane lost not only to the British Gloster Meteor and German Messerschmitt Me.262, but also fighters with piston engines: P-38 Lightning, P-47 Thunderbolt and trophy Japanese Mitsubishi Zero. Nevertheless, the advantage of it was – having considered the mistakes allowed at creation of Airacomet, the American industry constructed more successful planes.

The deck fighter of the 50th years of Vought F7U Cutlass frightened pilots of an unusual structure (the aerodynamic scheme "polubeskhvostka") and low-power Westinghouse engines. "Toasters of Westinghouse give more heat, than engines of the same brand", – pilots joked and flatly refused to fly on Cutlass. Business reached before that ordering the Naval Forces flight group of the USA "Blue angels" the rear admiral resigned after news that "Angels" will replace to Vought F7U.

Other deck fighter Grumman F-11 Tiger became famous for that lined itself. During tests of a 20-millimetric gun the pilot of Tiger managed to catch up with own shells. The problem of the plane was not so much in an unsuccessful design, how many in unreliable and badly operated engines, writes NI.

On a high-rise interceptor of Convair F-102 Delta Dagger of the U.S. Air Force laid hopes. Created in a heat of "cold war", it should force down hordes of the Soviet bombers in case war will turn into "hot". "The characteristics put by designers were promising: supersonic, all-weather, a ceiling of 16 kilometers, – until Convair did not fly up", – writes the edition. On tests pilots of Delta Dagger faced wave resistance on transsonic speeds. The plane should be altered, that the American pilots nicknamed "a bottle from cooks" as a result turned out. According to other version, designers were inspired by Marilyn Monroe’s figure, notes the edition.