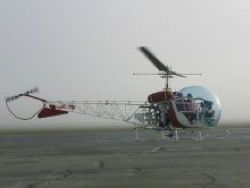 The state company "Ukroboronprom" presented the easy evacuation Lev-1 helicopter. Development is capable to evacuate quickly wounded and victims, operatively to deliver experts to a place of events, to carry out patrol and search and rescue works, to transport to 500 kg of cargo, is told in the product description. Installation on "Lion" of light weapons is possible also, the Ukrainian defense industry employees noted.

In the newest development of "Ukroboronprom" the American Bell-47 helicopter of 1964 of the release, imported into Ukraine from Canada in the spring of 2015 is without effort guessed. The innovation consists in replacement of the regular piston engine on turbovalny from Mi-2, reported the military blog.

Bell 47 developed in 1946 was first-ever mass helicopter. It was serially produced till 1974, sets for assembly are issued still. The helicopter is familiar to the population of the USSR on Abba "Arrival" plate on which envelope the Swedish quartet is represented against Bell 47.

The novelty caused the next portion of ironical comments in a network.

– The Ukrainian defensive industry continues to deliver regularly to news under a heading "More hell!", – the author of the blog commented on appearance of "Lion".

– If on this helicopter to fasten magnificent "Stugna" (the Ukrainian anti-tank complex. – an edition) that the fighter lay on a stretcher and пулял, I think, Moscow would reach in a week, – writes Agentura001.

– I do not see the krovatny grids which so well have proved in nice fights of the Ukrainian army. This one already smells slightly of change, – noticed Mega_herz.

Let’s remind, at the end of September the Ukrainian company "Motor Sich" showed the shock helicopter made of old Soviet Mi-2. On the easy car hung up pair of grenade launchers, NURS blocks, and in salon there was a manual machine gun. "The machine gun in salon somehow especially touches. Whether it is supposed to arm crew members with revolvers and кортиками?" – readers giggled.