Protection of civil planes against PZRK passed tests of NATO 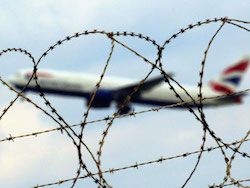 The North Atlantic alliance (NATO) recognized as successful tests of the system of protection of civil planes developed by the Israeli concern "Elbit" from mobile surface-to-air missile systems.

Tests were carried out together with aircraft manufacturing corporation Airbus and the Ministry of Defence of Israel.

As reports Sponser portal, the test system was established on the Casa C-295 military transport plane.

Development of systems of protection of civil planes began in 2003, after attempt to bring down on take-off by means of PZRK the plane flying to Israel from Kenya.

In 2014 the ministry of transport of Israel made the decision on equipment of planes of the Israeli airlines by system of protection against production "Elbit Maarakhot" PZRK C-Music.

The late was reported that the Israeli planes flying to Eilat, are already equipped with systems of protection against PZRK.

In the autumn of 2014 the C-Music system was bought by Germany for protection of military transport planes.