Su-34 will turn into the plane of radio-electronic fight 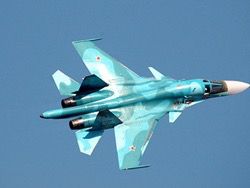 This year the Ministry of Defence of Russia will receive the first set of the pendant equipment, allowing to turn the front Su-34 bomber in the specialized plane of radio-electronic fight (REB). It in interview of RIA Novosti news agency was declared by the first deputy head of KRET concern Igor Nasenkov.

«[Plane] can protect not only, but also to provide effective radio-electronic suppression of radar-tracking complexes and antiaircraft missile systems, planes of distant radar-tracking patrol and so on, that is protection and other planes of group», – was reported by Nasenkov.

The REB Hibiny-10B complex including some stations of active hindrances, including individual and group protection against radar-tracking heads of homing of air-air and air state rockets was specially developed for regular equipment of Su-34 planes.

Su-34 – the domestic multipurpose shock plane (also is called as a front bomber and sometimes – a strike fighter), created in the late eighties during deep processing of the project of an interceptor of Su-27. The double car is intended for drawing of high-precision bombing attacks to the land and surface purposes in operative and tactical depth, and also defeats of air targets of the opponent.

Arrives in armies since 2006 on replacement of front bombers of the previous generation Su-24. As a part of Aerospace forces of Russia about 80 such cars are. Within the existing state program of arms military should receive 124 Su-34 planes by 2020, further the volume of deliveries can increase. Now planes of this type take part in operations in Syria.