Russia wants to win the sky 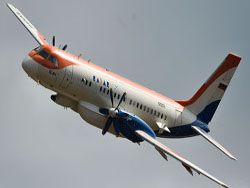 For the last two decades the market of passenger planes was accurately divided. In a segment of distant aircraft the market is supervised by Airbus and Boeing, the small competition is observed and in a segment of regional planes, that is planes by capacity to 130 passengers and range of flight to 3000 km. The Canadian producer of Bombardier, the Brazilian Embraer and the French-Italian concern ATR strongly took the positions.

And here to join in game one more applicant wants. This week the first flight made the Japanese regional Mitsubishi Regional Jet plane. Now and Russia known still from Soviet period for planes Il, Tu and the Yak, aspires to rush on the market.

Meanwhile successes were modest. On Sukhoi Superjet 100 presented four years ago with a big pomp meanwhile is only the little of more than 200 orders. The most part from them is the share of the Russian company "Aeroflot" – 50 planes, 20 from which are already put. In the Russian company the share of Airbus planes (over 100 units) and Boeing (25) is higher even. To increase Superjet sales this year the Russian-Chinese leasing company was based.

And now Russia in literal sense "dug out" the old project – construction of the regional plane of design office of Ilyushin. Silt-114 will be issued again. When the plane made the first skilled flight in March, 1990, the Soviet Union was on the verge of disintegration. Money did not suffice even on development of the Air Force, not to mention civil aviation.

Shortage of financing led to delays. The flight license was issued only in 1997, only 18 planes in the territory of Uzbekistan which and at that time was in dependence from Moscow since then were constructed. In 2012 production in Tashkent was suspended.

This week there was an unexpected turn. «Instructions on development of the short-range plane on the Il-114 base are given. Production will be adjusted in Nizhny Novgorod», – prime minister Dmitry Medvedev in the account in the microblog Twitter wrote.

On the Russian state television laudatory anthems are already audible. Cost of the plane will make from 16 to 17 million dollars that is much lower, than at competitors – ATR-72 (25 million) or Dash 8 Bombardier (35 million dollars). And service of the Russian plane calculated on 64 passenger seats, will cheaper manage. 590 kg of fuel at an o’clock of flight, in case of ATR are 800 kg, and Dash of 8-2600 kg. And aerodynamics of the Russian plane is very effective, but nevertheless calculations not absolutely honest, after all ATR-72 and Dash 8 contain bigger number of passengers.

It should not belittle "Ilyushin’s" dignity at all. Its third advantage is connected with its nickname – «The rural plane». The name it is obliged that, in principle, can make landing on any firm surface. That is provincial airfields where there are no funds for runway modernization suit also.

«The project will give the chance to keep competence of area of turbo-propeller planes. Are grateful to the federal government and administration of the Nizhny Novgorod Region for the forthcoming help in the organization of the production, a favorable investment and tax mode, introduction of supporting social programs», – the head of OAK corporation Yury Slyusar declared.

Due to the formed ideological conflict between Russia and the West the Kremlin does not save on similar projects. The motto – import substitution. Development of own plane which will reduce dependence on Airbus and Boeing, is entered in the general concept as well as possible.

At the same time experts warn that the beginning predicted for 2018-2019 serial production can be tightened nevertheless. Silt-114 though can theoretically be used in military sector and also for realization of strategic tasks in the Arctic, but nevertheless the plane of too small country for large ambitions, as well as for its extensive territory.

Therefore it for Russia has less priority value, in particular, considering the decreasing budgetary income and a forecast for decrease in defensive expenses, the director of the Center of the analysis of strategy and technologies Ruslan Pukhov speaks. Especially attractive Il-114 project in OAK did not consider.

The competition and in the domestic market is besides observed. Shortly on the market leaves MS-21 to which informal designation of Yak-242 was fixed. The first skilled flight of the medium-range aircraft is planned for 2016. And still from the Russian point of view MS-21 is not yet in full readiness. The first planes for the present demands foreign support in the plan of technologies. Only since 2018 the plane will be equipped with the Russian engines. Time will show, whether there will be then funds for development of one more aviation project.