In Tuva started to look for the missing Mi-8 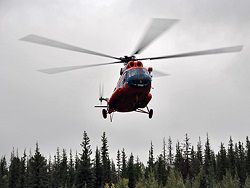 In Tuva started searches of the missing on Friday, October 10, the Mi-8 helicopter. As reported RIA Novosti news agency a source in power structures of the republic, operation becomes complicated weather conditions.

«On a route of missing Mi-8 of flight bad weather – low overcast», – the interlocutor of agency told.

According to the senior assistant West Siberian transport prosecutor Oksana Gorbunova, onboard the helicopter there were 12 people: seven passengers-vakhtovikov, three crew members and two technicians.

Mi-8 «The Tuva airlines», flying from the settlement Sorug to Kyzyl, at the scheduled time did not contact. Allegedly, the helicopter was rented by the private company and carried out snow measurements.