Terminators will arrive on Novosibirsk base of army aircraft 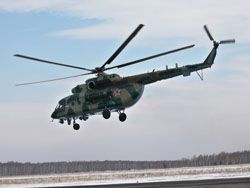 Four links of transport and assault Terminator Mi-8AMTSh helicopters will arrive within state defense order on arms of air base of army aircraft of "Tolmachevo" (The Novosibirsk Region), the press service of the Central military district reports

The flight and technical structure of a part already started to pass retraining on this updating.

Arrival of the first party of helicopters as a part of one link from Uhlan Udensky plant is planned in April, the others – within a year.

The transport and assault Mi-8AMTSh helicopter is capable to carry out of a task of fire support of divisions in the field of fight, destroying armored machinery, manpower and engineering constructions of the opponent. The helicopter can transport to 37 paratroopers, to 12 wounded on a stretcher or transport to 4 tons of cargoes, carry out search and rescue and evacuation operations.

The helicopter distinguishes a wide criteria range of operation: any time of day, various climatic and meteoconditions, an icing, the marine environment, heights to 6 thousand m, temperatures from-50 to +50 degrees on Celsius.

For performance of fighting tasks the helicopter is equipped with modern system of rocket and shooting arms, a complex of means of protection from defeat, the landing and transport and sanitary equipment.