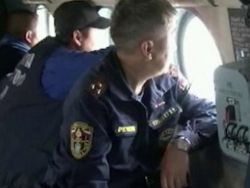 In Tuva operation on search of the missing the Mi-8 helicopter proceeds on October 10, 10 aircrafts participate in it. Let’s remind that the day before with approach of night it was necessary to interrupt searches, they were renewed with a dawn.

The group of the rescuers participating in searches of the Mi-8 helicopter, considerably increased. As reports «The first channel», all in search of the helicopter 10 aircrafts participate. At present they checked already 9 thousand square kilometers but while it is ineffectual.

Earlier in the press service of department of the Ministry of Emergency Measures on the republic it was reported that for the morning the day before yesterday searches of the Mi-8 helicopter which has gone in Tuva in them involved eight aircrafts – five helicopters and two planes. Two more as reports ITAR-TASS referring to in the press service of saving department, were in a reserve.

Let’s remind that Mi-8 of the company «Tyva the Avia» was gone in the afternoon on October 10 on the way from the town Sorug to the Todzhinsky district of Tuva to Kyzyl. Onboard the gone helicopter there were 12 people – experts from the Khakass city of Sayanogorsk, carrying-out measurements of levels of snow in the territory where installation snegomerny a match for Sayano-Shushenskaya hydroelectric power station is supposed.

Since Friday search and rescue planes and helicopters investigated the greatest part of the territory from the town, the helicopter, to a place where it should arrive past Friday from where took off.

«The settlement Toora-Hem of the Todzhinsky area of the republic for carrying out investigation left land groups which also continue to work in places, possible for search», – reported the republican Ministry of Emergency Situations, reports ITAR-TASS.

As wrote, on Saturday evening search of the Mi-8 helicopter of the company «Tyva the Avia», gone in Tuva the day before, it is suspended till 4:00 Moscow time Sundays.

In the government of Tuva noted that the commander of crew of the gone helicopter Adar-ool Norbu – the expert of the highest class. In March of last year the crew under its management showed courage and professionalism during searches of victims under an avalanche of teenagers in the Mongun-Tayginsky area. The commander even was awarded by a medal «For valorous work», transfers NEWSru.com.