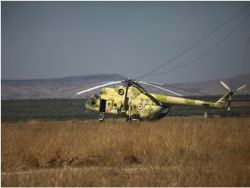 The United States found some Russian helicopters in airfield in Syria. About it reports Reuters referring to sources in Washington.

As declared one of sources, in airfield at least four helicopters, including fighting were fixed. When the Russian helicopters arrived to Syria, it is not known. Models of helicopters are not called.

On September 14 Reuters reported about a transfer of the Russian artillery and seven T-90 tanks on airfield in the Syrian province Latakia. The ambassador of Syria in Moscow Riyad Haddad disproved this information.

Earlier the Pentagon declared sending to Syria Russian transport planes and armed groups without identification marks. The official representative of State department John Kirby on Tuesday, September 15, noted that the USA have tools for «further isolation of Russia» if it supports Assad.

Making comments on threats of Washington, the press secretary of the president of Russia Dmitry Peskov declared that the country will not get to the international isolation. According to him, Moscow supports Assad as the most effective force in the region whereas the anti-terrorist coalition led by the USA does not give «distinct explanations» to how it is possible to carry out conflict settlement.