To what will lead incident with the Armenian helicopter? 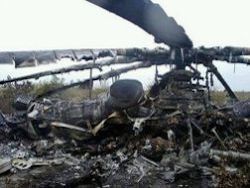 Occurred the day before in a zone of the Nagorno-Karabakh conflict incident with VS helicopter of Armenia caused concern of the world community.

Today the special representative of the secretary general of NATO in the Southern Caucasus James Appaturay made the statement in which called both parties of the conflict for restraint. "Irrespective of circumstances of incident, the party should show restraint and achieve a diplomatic resolution of conflict", – he emphasized.

Earlier the concern was expressed by cochairmen of the Minsk OSCE group. "We are deeply concerned events which led to this incident – to the first in own way after achievement of the agreement on a truce. The region does not presume one more round of violence as this summer", – it is told in the statement extended by them.

According to the cochairmen, occurred on the eve of an event "remind of volatility of the conflict and need to make active effort on its long-term settlement".

With them солидаризовался the European Union which has expressed "full support to efforts of the Minsk OSCE group and three cochairmen". "It is necessary, that all parties showed restraint and avoided any actions or statements which can aggravate a situation. We urge to investigate this incident", – is told in the communique of the representative of head of diplomacy of EU.

"The messenger of the Caucasus" learned opinion of the Russian experts that stands up for the occurred incident, and also about its possible influence on process of peaceful settlement of the Nagorno-Karabakh conflict.

As the vice-president of the Union of the Consulting-Analitika-Piar companies (СККАП), the expert of "the Messenger of the Caucasus" Ismail Agakishiyev noted, happened is natural result of actions of those forces which organized military doctrines in occupied territories of Azerbaijan. "Their carrying out is threat for safety of this republic. Doctrines from the very beginning are military provocation. Especially aggravates a situation that circumstance that during them border violations by helicopters of Armed forces of Armenia that creates threat not only for occupied, but also for not occupied territories take place. Standing up for similar people perfectly understand it therefore their actions obviously are a call and provocation, a natural result of that is the incident which has occurred the day before", – he emphasized.

"These people came to power in result of the Nagorno-Karabakh conflict and want, that it proceeded and further. Armenia faces big economic problems which compel the population to leave the country in search of means for existence. In the country deep economic and political crisis. Does not pass also weeks that did not pass meetings of the unemployed and that disagreements had not an effect on a ruling clique. To the authorities charges that they do not take up the problems of the population constantly sound, and wallowed in corruption, in trade monopolization in the conditions of country blockade for the purpose of its use as means of own enrichment. In this regard tops want to distract attention of the population from internal problems, trying to focus it on not settled conflict", – the expert considers.

Thus they understand that, undertaking similar actions, they risk lives of the simple military personnel, but it does not disturb them, them does not worry that people of whom houses wait for a family can be lost.

"Better the money spent for carrying out doctrines, was spent for pensions, a grant, social benefits, housing construction for the people injured with earthquake of 1988, compelled and to this day to live in not heated carriages. If the present authorities of Armenia cared of needs of its population, they would arrive exactly so", – Ismail Agakishiyev summarized.

Speaking about what consequences will have for further development of peaceful settlement of the conflict the occurred incident, the deputy chairman of Editorial council "Messenger of the Caucasus", the general director of Institute of the Caspian cooperation Sergey Mikheyev expressed opinion that it only will aggravate a situation. "It will not render good influence, it is obvious. Generally war never came to an end, firefights were conducted constantly all these years, but, of course, the helicopter is more serious business. It only will fuel tension, that’s all. For settlement it will not bring any advantage in any way", – he declared.

The political scientist, the deputy director general of the Center for studying of the former Soviet Union of IATs Moscow State University Alexander Karavayev too considers that incident will complicate a situation. "It is unconditional, in short-term such prospect, in duration of the next months it will render any negative influence. There was very strong tension, the parties will express irritation, to sing high notes of propaganda war", – the expert is afraid.

"But in the strategic plan, it seems to me, this incident a little that changes in the relations, let us assume, those the countries which are sponsors of settlement. In principle, this sort of collisions, of course, bring the nervousness, but they do not change spirit and those lines which were designated earlier which have strategic character. Meanwhile it is one of the incidents, rather unusual meaning that it for the first time, probably, in 20 years gets off the helicopter and in general used this sort of equipment", – noted Loaves.

Thus, according to the Russian political scientist, the head of commission on the international cooperation and public diplomacy of Public Chamber Russian Federation, the director of Institute of political researches Sergey Markov, an event the day before, strangely enough, can make beneficial impact on process of peaceful settlement of the conflict in Nagorno-Karabakh. "I think that it will have rather positive, pacifying consequences, apparently, as after all it becomes blow on "war party" in Yerevan. For them it will be a good lesson which will show to the leadership of Armenia that it is not necessary to bury and put the country in an uncomfortable position, exposing it an aggressor in addition still endangering helicopters. And it will result in bigger accuracy in actions of Armed forces of Armenia", – he considers.

"On the other hand, for the Azerbaijani management it is very important to show to public opinion which demands that the situation somehow moved from the dead, frozen point, any successes. And here they it is available – the powerful military equipment of the opponent is brought down, the air space of the country therefore it will have very positive impact on public opinion of Azerbaijan and perception this public opinion of policy of the country leaders is protected. That too, probably, will lead to some decrease in intensity", – the political scientist added.

"Therefore it seems to me, in a paradoxical way this military conflictness has chance to bring to decrease in intensity", – Sergey Markov summarized.