Mass media: shots on the Ukrainian helicopter was some 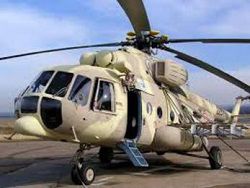 Shots on the Ukrainian Mi-8 helicopter in Kramatorsk was a little, fire conducted with roofs of high-rise buildings on Parkovaya Street, writes the local Kramatorsk Internet edition. Info referring to eyewitnesses.

According to inhabitants of one of houses, they heard three shots. "Right after shots six people in a camouflage, but without masks on faces, left an entrance, quickly sat down in UAZ and pair more of cars without registration number and left", – writes the edition.

Now in yards of houses on Parkovaya Street there are a lot of people in a militian form and civil.

As it was reported, the military helicopter of Armed forces of Ukraine Mi-8 was fired in airfield in Kramatorsk. After attack the car blew up.

According to group "Information resistance", the Mi-8 helicopter was on take-off when in it shot ПТУРС (an anti-tank operated rocket was made, now it is accepted to use the term PTUR – the anti-tank guided missile) more often. Later Tymchuk Besides, reported, after the first hit unknown made on already empty helicopter the second shot (also ПТУРСом).