Putin charged to strengthen blows of the Russian aircraft in Syria 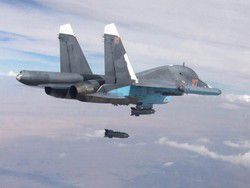 The president of Russia Vladimir Putin demanded to strengthen blows of the Russian aircraft in Syria.

"Our fighting work of aircraft in Syria should be not simply continued. It should be strengthened so that criminals understood that punishment is inevitable", – the head of state at meeting which led late at night on Monday declared.

On it the head of Federal security service Alexander Bortnikov reported that act of terrorism became the cause of accident of the Russian A321 liner in Egypt.

"I ask the Ministry of Defence and the General Staff to present the relevant proposals. I will check, how there is a work", – Putin promised.

"We will act according to article 51 of the Charter of the United Nations providing the right of the states on self-defense", – the Russian leader emphasized.

"Everything who will try to assist criminals, should know that consequences from attempts of such concealment will lie completely on their shoulders", – Putin is sure.

He demanded from intelligence services to concentrate on work on search involved in act of terrorism.