China presented the competitor to the Russian plane MS-21 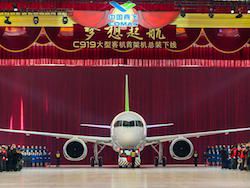 The medium-haul Comac C919 liner first developed and constructed in the People’s Republic of China is urged to press Airbus and Boeing production, but is most dangerous to Irkut corporation.

A320 and B737 reductions are perfectly familiar to air passengers of the whole world. But in a couple of years, most likely, quite habitual can become and C919. So the medium-range civil aircraft first completely designed and constructed in China is designated. Its solemn presentation (a vykatka from shop as aircraft manufacturers are expressed) took place on November 2 in Shanghai.

The letter "C" choice here obviously is not casual. He speaks not only the name of Comac manufacturing firm (Commercial Aircraft Corporation of China). It also the unambiguous announcement of intention to press two world leaders – the European company Airbus and the American Boeing.

These two giants approximately equally divide now among themselves the global market of average and long-haul passenger liners on which in due time the defined role was played, in particular, by Soviet "Tupolevs" and "Ilyyushina". However today airlines of the whole world order for the midland – and especially transcontinental flights – practically only "Airbuses" or "Boeings".

Slightly more widely a choice of producers in a segment of the regional planes usually containing no more than 100 passengers and flying on distances approximately to 2 thousand kilometers. Here, for example, the Brazilian company Embraer, the Canadian Bombardier and Russian "Sukhoi Civil Aircraft Company" (Sukhoi Superjet 100 model) among themselves compete.

However to air carriers nevertheless medium-haul liners – those "working horses" who are capable to transport about 200 passengers on distances from 2 to 5 thousand kilometers most of all are required. Airlines have today a choice between the uzkofyuzelyazhny Boeing B737 plane most popular in the history of aeronautics in every possible options and Airbus A320 family (updatings А319, А320, А321 differ with only the sizes), including especially harmless A320neo model.

Russia builds "The main plane of the XXI century"

On the market of medium-haul liners the Irkut Corporation with the MS-21 model ("The main plane of the XXI century") is going to break through Russian ". On a site of the company it is told that it, "accurately following the program schedule", plans to construct the first planes for carrying out tests in 2015". On August 25 its director general Alexander Veprev during a teleconference informed the air show which has arrived on opening MAX-2015 the president of Russia Vladimir Putin that the fuselage of the first MS-21 plane is accurate for 90 percent.

On the same day Chief of the Russian Presidential Administration Sergey Ivanov told to journalists: "I can sound it – in 2018 the first serial planes are already contracted, we enter for the first time the direct competition to Airbus". But the presentation which has taken place now in Shanghai of C919 shows what to compete Russian MS-21 it is necessary not only and even not so much with Europeans, how many with Chinese. 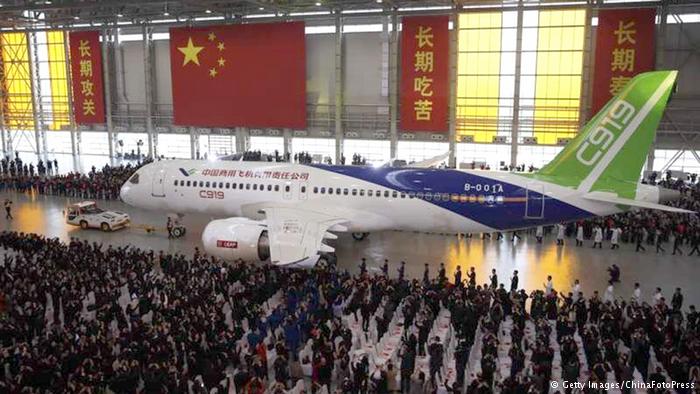 Ceremony of a vykatka from the C919 plane shop, taken place in Shanghai on November 2, 2015

And while they advance Russians. In any case Comac already showed to the government, businessmen and world community the ready C919, capable to transport 168 passengers on distance to 5,5 thousand kilometers. However, in the sky this liner for the present never rose – the first test flight from this year is transferred on the following. Moreover, the China Daily newspaper argues that the beginning of flight tests can be tightened even till 2017.

On the Chinese market "Irkut" not to break through any more

As to lead them it is planned for three years, the Russian medium-haul liner still has chances to enter the market before the Chinese competitor. However, at Irkut plant, whose management argues that it already has 175 firm orders, terms of flight tests too can appear under the threat. While the first flight MS-21 is planned for the beginning of summer of 2016.

But even if serial release of the Russian novelty will begin earlier, than Chinese, to find buyers in quickly growing People’s Republic of China market "Irkut" hardly it will be possible. After all during presentation in Shanghai the state company Comac reported that on C919 517 orders from 21 clients, almost all of them – Chinese arrived already. However, it is unclear, whether there is a speech about firm orders or only about options. But to local air carriers, whether they want that or not, it is necessary to buy the first domestic medium-range aircraft in bulk, it appears.

For now he is not ready, China continues to order "Boeings" and "Airbuses". So, on October 29 within visit to the People’s Republic of China of German chancellor Angela Merkel (Angela Merkel) the contract in volume in 15,4 billion euro providing delivery to China along with 30 long-haul A330 liners also of 100 medium-haul A320 was signed. And it in spite of the fact that in the China, in a seaport Tianjin, since 2008 operates joint venture on assembly of "Airbuses".

Besides it is possible not to doubt that the Chinese state corporation Comac will aspire to advance the child just on the same markets on which the Russian samoletostroitel, whether it be the Asian countries, for example, counts also Iran, or the African states. To break through on long ago mastered Airbus and Boeing companies European and American markets to two beginners it will be obviously hard, especially at the beginning.