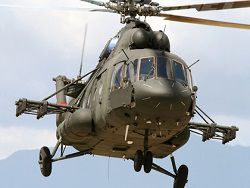 Russia since the beginning of 2014 sent 12 multi-purpose Mi-17B-5 helicopters to Afghanistan, reported on Tuesday, April 29, ITAR-TASS. Deliveries are carried out within the contract with the USA on 30 cars of this kind.

The main performer of the contract is the Kazan Helicopter Plant on which the next party Mi-17B-5 three of which it is planned to put at the end of May is now made. Within the agreement, the army of Afghanistan will receive other 18 cars till the end of 2014.

The prime contract for delivery of 21 helicopters was signed by "Rosoboronexport" and the government of the USA on May 26, 2011, and executed to the middle of 2012. The additional agreement according to which in 2013 Russia finished deliveries of 12 more Mi-17B-5 helicopters was the same year signed. Then in 2013 "Rosoboronexport" and the government of the USA coordinated and signed the new large agreement on delivery in 2014 of additional party from 30 helicopters.

So far 45 Russian Mi-17B-5 helicopters are delivered to Afghanistan. In total according to arrangements between two countries for the Afghan army within joint efforts on fight against the international terrorism 63 Mi-17B-5 for the sum 1,3 billion dollars will be put. All helicopters are equipped with system of night vision.

From the moment of the conclusion of the first contract in the USA possibility of the termination of cooperation with Russia in the sphere of deliveries of helicopters for Afghanistan is discussed. It became more active in February, 2014 in connection with crisis in Ukraine and plans of the USA concerning sanctions against Russia. Lobbyists of this discussion are, including, the American producers of helicopters. At the same time, the Pentagon considers necessary to continue cooperation with "Rosoboronexport".

In February, 2014 the special representative of the president of Russia across Afghanistan Zamir Kabulov declared that the additional party of Mi-17B-5 helicopters can be delivered to Kabul. At that time the parties carried on preliminary negotiations; possible terms of signing of the agreement were not specified.