Flights of Kogalymavia detain in Moscow and Petersburg 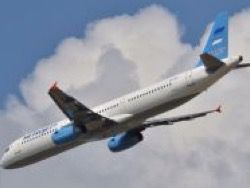 At the Moscow airport "Domodedovo" departures of A321 liners of Kogalymavia airline in the Egyptian Sharm-el-Sheykh and Turkish Antalya are late, informs an online board of capital air harbor.

According to Domodedovo airport service, flight on a route Moscow – Sharm-el-Sheykh is late at three o’clock, and Moscow – Antalya – on hour.

Meanwhile, at the Petersburg airport "Pulkovo" passengers of a board of "Kogalymavia" wait some hours for landing to flight to the Egyptian resort of Sharm el-Sheikh which already transferred twice. Remains to unknown and time of a departure of the liner.

Let’s note that today Roskomnazdor reported about transfer of "Kogalymavia" to supervising service of orders on a suspension of operation of all planes of the A321 model for the period of additional checks of an air carrier.

A321 liners of "Kogalymavia" were taken in leasing in Ireland, registered in its territory and should pass maintenance in the organizations approved by the European agency on safety. According to International Civil Aviation Organization standards, the Irish experts should carry out control of the flight validity of these airbuses and periodic check of their technical condition.