VS of Syria strike back 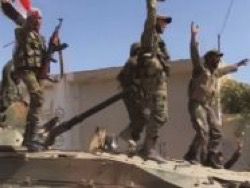 Good luck of terrorists which long time persistently tormented Syria in hopes after all ended to throw off Assad’s mode. Did not leave. Probably, work of the Russian aircraft inspired the Syrian soldiers on the retaliation which success surpasses all expectations. Governmental armies beat off some attacks in the south of the country, and also could destroy an escort of terrorists. Result: tens infidels are liquidated.

As the apartment of terrorists and their car with antiaircraft installations was destroyed a staff. VS of Syria quite successfully worked, it is obvious. It seems to me that shortly the province Darja where this retaliation was struck, will be beaten off from hands of terrorists soon. That is remarkable, this place where the first national performances, and then and armed conflicts began. It would be excellent to put an end, to fix positions of the Syrian army there, all Syrian conflict from where arose and expanded.

Certainly, our aircraft still will walk on positions of terrorists the massive attack. The sin not to help the Syrian soldiers when they, at last, could find belief, beating off the grasped territories. Even in the summer of effort of VS of Syria seemed simply senseless, but already today becomes clear that the victory can be where is closer. And there let our VKS will walk across all Middle East to clean lands from this "artificially created" and vskormlyonny infection. From terrorism.