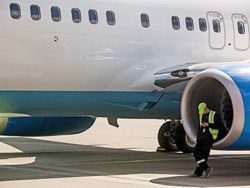 The certificate suspension POPPY can affect operation of only six Boeing 737 being in fleet of two airlines. About it as reports TASS, the head of Association of operators of air transport (AEVT) Vladimir Tasun declared.

Two liners belong to "Gazpromavia", four more – to Far East airline "Aurora" (affiliated structure «Aeroflot)», were reported by head of AEVT which members are 19 leaders of airlines of Russia. Tasun explained that about 200 Boeing 737 planes are in foreign registers (Ireland and the Bermudas – a comment to "Lenty.Ra"), the decision POPPY on a response of the certificate will not affect them in any way.

On November 5 it became known that POPPY withdrew the type certificate at the Boeing-737 planes maintained by the Russian air carriers. Permissions to operation lost two updatings – Classic and NG. Need of completion of a control system is called elevators on what POPPY informed Boeing the reason of a response of the certificate, follows from committee documents.

After November 5 the Rosaviation declared that POPPY the decision cannot stop Boeing-737 operation in the Russian airlines. In department emphasized that the ban on flights of this or that type of the aircraft can enter only specially authorized on that federal executive authority which did not accept such decision.