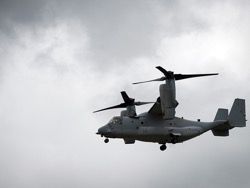 The experimental military man конвертоплан, developed by "August Vestland’s" company, broke today in Italy. As "Stamp’s" newspaper reports, incident occurred between the cities of Santya and Trontsano, nearby to Verchelli’s town in the region Piedmont.

According to eyewitnesses, the aircraft lit up in air. Konvertoplan – all on fire – flew by directly over houses, witnesses of incident note, the pilot directed it aside from the city – on a corn field. Both pilots who were in a cabin, were lost.

The crash reason while is unknown.

Konvertoplana – the special class of rotary-wing equipment possessing a number of advantages in comparison with traditional aircraft, executed according to the plane or helicopter scheme. They give the chance to carry out vertical take off and landing on the platforms limited in the sizes and thus to transport passengers or cargoes on bigger speed and on bigger distance, than traditional helicopter equipment.