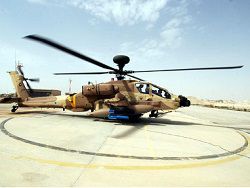 The Israeli shock Boeing AH-64 Apache helicopters will undergo "peeling" procedure. As reports Flighglobal referring to a source in the Air Force of Israel, after removal of an old paint coat of the car on tens kgs become easier.

To such decision the Israeli Air Force came after installation to one of AH-64A helicopters of the additional equipment. As a result the mass of the car came nearer to the most admissible value.

As experiment military tried to remove old paint by two Apache helicopters. As it is reported, "peeling" not only reduced mass of cars, but also allowed to remove from them superfluous balancing cargo. Thus by helicopters the place for the new equipment was released.

As a result old paint is offered to be removed not only from AH-64 Apache, but also from helicopters of other types which are adopted Israel.

According to Flightglobal MiliCAS, on arms of the Air Force of Israel there are 48 Apache helicopters in AH-64A and AH-64D versions. The pure mass of the helicopter of this type makes 5,1 tons, and equipped – eight tons.