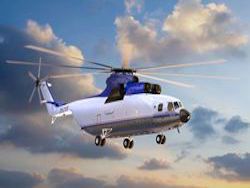 The Russian holding «Helicopters of Russia» started production of the new heavy helicopter at plant in Rostov-on-Don. Mi-26Т2 today has not equal on technical and economic indicators. In a fuselage and on an external suspension bracket it can bear the whole 20 tons of cargo that is an absolute world record on loading capacity among serial helicopters. The new domestic heavyweight being the commercial version of the military Mi-26 helicopter, will be used for performance of the most different tasks – from transport and fire-prevention, to saving and evacuation. Producers are sure that their new child will be demanded as in the territory of Russia, and is far beyond its limits.

The new weight is taken

«We declare the beginning of production of the upgraded heavy Mi-26T2 helicopter. Helicopters of the Mi-26 type are unsurpassed according to the characteristics, and modernization considerably expands potential of use of these cars. It is sure that Mi-26T2 will be demanded both in Russia, and beyond its limits», the deputy director general of holding «Helicopters of Russia» Andrey Shibitov declared. Mi-26Т2 is the deeply upgraded version of the civil Mi-26T helicopter corresponding to recent trends in world aircraft industry. The novelty can be used at suppression of fires, transportation of large-sized cargoes and equipment in a cargo cabin or on an external suspension bracket, to transport paratroopers or wounded. This helicopter is capable to perform installation and construction works of various degree of complexity. Besides, by means of the Mi-26T2 helicopter operative delivery and independent filling on the earth of various aviation and land equipment can be carried out. The maximum speed of the helicopter makes 270 km/h, and a practical ceiling of flight – 4,6 km.

The car received new avionics that gave the chance to apply the helicopter at night, and also allowed to reduce number of crew members with five to two people. If for transportation of cargo the external suspension bracket is involved, the crew of the helicopter increases to three people – to supervise a suspension bracket owes a bortoperator. The design, the equipment and Mi-26T2 systems allow to maintain it at any time, in simple and difficult meteoconditions, over the flat district and is high in mountains. Thus the new helicopter is unpretentious in service as does not demand special air field means of servicing and is capable to long independent basing. Instead of standard analog devices the new Russian heavyweight received so-called «a glass cabin» with five multipurpose LCD displays, a modern digital complex of communication, and also control panels and a set of duplicating electromechanical devices.

The new navigation complex of the helicopter considerably increased safety, automation of flight control and essentially simplified work of pilots. For example, the early warning system of proximity of the earth in due time notifies crew on dangerous rapprochement of the helicopter with a surface. The system of display of an air situation and the collision prevention in air defines possibility of potential collision and allows to supervise space in radius from 9 to 11 kilometers around, directing on this distance inquiries to all aircraft. For ensuring comfortable flight at low and high temperatures the cabin of crew is equipped with air central air, and a cargo cabin – a heating system. For simplification of loading and unloading transport the compartment is equipped with special adaptations. And the cargo condition on an external suspension bracket can be supervised now visually by means of the special television device.

Who stands up for creation of Mi-26T2

Creation of heavy helicopters was traditional especially complex challenge for designers. But Russia gained today enormous experiment on development and production of such equipment. So, the Moscow helicopter plant of M.L.Milya developed the heavy Mi-6 helicopter which was made in Rostov-on-Don from 1959 to 1980. Mikhail Milya’s also design office developed the unique heavy V-12 helicopter which is also known as for Mi-12 which unfortunately did not start in a mass production for the economic reasons. The military Mi-26 helicopter and its commercial Mi-26T version are issued on "Rostvertol" since 1980, and this car perfectly proved in all scopes.

Mi-26Т2 appeared as a result of deep modernization of the Mi-26T helicopter. The Moscow helicopter plant of M.L.Milya realized this program together with "Rostvertol" under holding patronage «Helicopters of Russia». In 2010 development of design and operational documentation on the helicopter came to the end. During the same time Mi-26T helicopter completion in the experimental Mi-26T2 version began. In December, 2010 the prototype was transferred from shop of final assembly of "Rostvertol" on flight-test station for performance by representatives of the general developer of tests which successfully came to the end in 2011.

Modernized Mi-26T2 made the first flight on February 17, 2011, and already a month later its land and flight demonstration to delegations of foreign countries took place. In August, 2011 the helicopter showed to general public on an air show MAX-2011 where it caused a keen interest both visitors have exhibitions, and at potential customers. As a result in 2013 the first and rather large contract for delivery of Mi-26T2 was concluded in one of foreign countries. For all last year the prototype carefully passed preliminary and special flight tests. As a result registration of all design documentation came to the end that allowed to start a mass production of the helicopter at Rostvertol plant in Rostov-on-Don.

From the moment of the creation helicopters of Mi-26 family passed a number of severe tests. They were actively applied in the Afghan war, during elimination of consequences of failure on ChAES, in Civil war in Angola and in the Karabakh war, during two Chechen wars. New updating of the biggest in the world of the serial transport helicopter plan to apply in the peace purposes but if it is required, possibilities of Mi-26T2 will allow to use effectively it and for protection of the Russian boundaries.