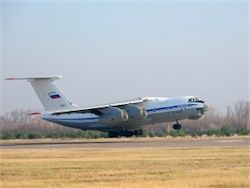 On Monday against Dubai Airshow air show – the 2015th Deputy Prime Minister Dmitry Rogozin blew up the Russian aviacommunity. «Instructions on development of the short-range plane on the Il-114 base are given. Production will be adjusted in N Novgorod at Sokol plant», – Rogozin in the profile wrote to Facebook.

Ils – the right to life

It is remarkable that more than a year ago (on September 10, 2014) Dm. Rogozin already publicly answered a question «why the government of the Russian Federation decided to return to production Il-114?.». I quote literally: «I will explain: because it is necessary at last to decide to do the planes. A shame when the great aviation power in a root began to depend on import the stranger of aviation equipment». In this aspiration «Arguments of week» completely support Dmitry Olegovich. Are glad that advance is observed.

Final test of updated and first serial military transport Il-76MD-90A – on range took place. Silt-76 – very strong car, «on a wing» still is a lot of copies from 950 pieces which have been let out till 2000. But its resource is not infinite, deep modernization and production transfer from Tashkent to Ulyanovsk – the decision true. Otherwise there could be a situation, as in civil aviation of the country when 97 % of flights are carried out on airliners of foreign production with offshore registration. On what to drag "gumanitarka" across Russia, Africa and aziya? And to take out from the Egyptian airports luggage of 80 thousand vacationers? Without this slogger it is impossible for itself to present functioning of airborne forces. Now it is possible to tell that two serial products "476" soon, till New Year’s holidays will be transferred to the customer – to the Ministry of Defence of the Russian Federation.

On ice airfield of station Novolazarevsky Il-76TD-90VD under command the chief-pilot of ilyyushinsky firm of the Hero of Russia Nikolay Kuimov and the chief-pilot of State Civil Aviation Research Institute of the Hero of Russia Ruben Esayan departed for the first time to Antarctica without risk. Engines PS-90A-76 allow to reach on one filling the Antarctic station and if weathers are not, even to roam an hour and a half and to return back, to a departure point – Cape Town. By cars with old, less economic D-30KP engines, crew each time passed «a non-return point». Will close before landing a fog a strip, will sweep up snow, and kerosene on a way back to the South African coast will not suffice.

It is good that in "Ilyushin" seriously consider options of modernization and a large-lot production shirokofyuzelyazhny Il-96 – whether on own initiative, and it is possible, from giving of parent organization – the Incorporated aviation corporation (OAK). Designers promise that will force the liner to grow thin, dump weight, will increase its passengers capacity to 350-400 people, will add ranges. The compounding is known: modern the electrician, wires by which the plane is entangled, materials of furnish of salon allow to dump tons of excess weight. And for such big plane as Il-96, it is possible also tens tons.

Iran looks for 50 billion dollars for development of the aviation industry and purchase of 500 passenger liners, the minister of housing construction and city development of the country Abbas Akhundi declared. Our officials picked up a flag – in December Russia will discuss with Iran advance possibility on the Iranian market of the Tu airliner? 204. It is a question of coproduction of this plane. «In the middle of December the exhibition within the Russian-Iranian dialogue in Iran is planned. I think, «on fields» this exhibition this subject will be discussed by representatives of United Aircraft Corporation and appropriate bodies of Iran», – told to the deputy minister of the industry and trade of the Russian Federation Andrey Boginsky at the Dubai Airshow exhibition – 2015. Interestingly, to what these discussions will lead?

We advance, and our darling "Aeroflot" throws out from the and "affiliated" parks aircrafts of a domestic production – Il-96-300, Tu? 204? 300, An-148-100. The leasing company "Ilyushin Finance Co" now diligent attaches inheritance unnecessary "Aeroflot" from "Transaero": two cargo Tu-204-100C and three passenger Tu-214. And the president of Association of operators of air transport (AEVT) Vladimir Tasun writes the address addressed to the first Deputy Prime Minister of the government of the Russian Federation Igor Shuvalov with a request once again to prolong cancellation of import duties for the airliners of foreign production which are temporarily imported on the territory of Russia. It is known that Dm government. Medvedev similar requests treated always favourably. All right, we will forget about "import substitution". But how to force officials to cease to lobby interests of the western aircraft manufacturers, having forgotten about own aviation industry?