Assads armies do not have air 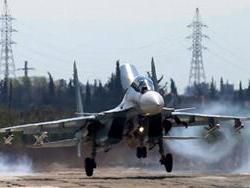 The representative of the Pentagon Jeff Davies declared that Russia in Syria for raids against fighters uses four air bases.

According to the American military man of department, besides airfield Hmeymim in Latakia where the main air forces of the Russian Federation are based, five helicopters were thrown on base of the Syrian Air Force Tiyas located in the desert between Homs and Palmira, taken with fighters of «The Islamic state» *. As notices the blog bmpd which is conducted by experts of the Center of the analysis of strategy and technologies, as indirect confirmation of it the recent reporting of Zvezda TV channel from positions of governmental army about Palmira serves. In it Mi-24P of VKS of Russia, supporting are shown to the Syrian military. It is noted that earlier the Russian helicopters in that area did not operate.

Besides, the representative of the Pentagon noted that the Russian military also are equipped on Air Force bases of Syria in the Boor and Sharyat about Homs. Probably, them will use too as the advanced bases for helicopters.

Let’s remind, on November 5 the Reuters agency referring to sources in the American power departments reported that the Russian military contingent in Syria since the beginning of operation doubled, as the number of bases which it uses increased also. If on September 30 the Russian military in SAR there were about two thousand, now is to four thousand. In the Ministry of Defence on this information did not make comments.

The official of the American military man of department in Reuters interview also noted that the Russian aircraft now is based on four bases (Hmeynim, the Boor, Sharyat and Tiyas), however the Russian calculations operating installations of volley fire, and also artillery of distant radius of action allegedly are outside of military facilities.

The American officials and independent experts consider that despite the Russian airstrikes, the Syrian approach did not reach big successes for the reason that forces resisting to Bashar Assad received the American anti-tank BGM-71 Tow complexes from Saudi Arabia. As a result governmental forces lost a significant amount of tanks and other armored machinery.

Political scientist Anatoly Nesmiyan (El-Myurid) notices: since the beginning of the Russian air operation in SAR took place slightly more than a month, however on the earth the governmental army with support of the Lebanese and Iranian allies did not reach any powerful results.

– While under control any large settlement is not taken. Therefore from the political point of view the result is necessary. And he can be received, only having increased number of planes as for the Syrian war it is obviously not enough three-four tens cars.

Besides, as far as I understand, still at the Russian aircraft serious interaction with the Syrian army is not adjusted. VKS Russian Federation generally bomb rear objects of fighters and while practically do not give to land coming parts direct support from air. As to the approach of the Syrian army, it practically on all directions chokes.

On November 5 it became known that to fighters was possible to grasp again the strategic city of Murek located near the large highway to the North from the city of the Boor. On October 30 with a big pomp it was declared that the Syrian army took the city under the control. As it appeared, Islamists managed to beat off it quickly enough. So fighters in a panic do not run anywhere, and rather quietly transfer approach.

As to the statement of the representative of the Syrian army of brigade general Ali Maykhuba that governmental armies took over the control of 250 square kilometers in southeast areas of the province of Aleppo, it actually means nothing. Because it generally desert areas, and from their control practically are not present any I pound. So objectively the problem of expansion of the Russian presence at Syria exists. But the matter is that our management more than once managed to declare that we will not be involved in this war. Therefore, certainly, any accumulation of forces will non-public occur.

Problem in that airfield Hmeymim in Latakia is loaded under the outset therefore there is a need for arrangement of new air bases for a transfer there additional forces. And it means that land parts – at least for protection of objects are necessary. Therefore it is quite logical that our group could be increased to four thousand people as reported the western mass media.

It is clear that helicopters are intended for ensuring direct aviation support of land forces and it is absolutely logical that them tighten to a first line. In the north of now business went so badly that Assad’s army should be reoriented on other direction now. And apparently, now the problem of capture of Palmira (about it on November 6 Ali Maykhub also indirectly mentioned, having noted that «during offensive combats the Syrian armies were fixed at two heights in the city of Homs and are put forward towards Palmira») is put to show result. As in information space messages that fighters not only take out from there artifacts suffice, but also destroy ancient columns, temples etc.

However the member of Advisory council of board of the Military-industrial commission at the government of the Russian Federation, the editor-in-chief of the magazine «Fatherland Arsenal», the colonel of a stock Victor Murakhovsky is sure that number of group of the Russian armies in Syria practically did not change.

– According to my information, the increase in the contingent really occurred, but not much more – a maximum on 100-200 people. As to airfields of the advanced basing, it is the truth: they are really equipped, and the army aircraft carries out from them flights on fighting application.

However, I will note that these objects are under control of the Syrian army whereas the land technicians from Russia only serve "revolving objects". Usually on airfields of the advanced basing the link – that is four helicopters is thrown. And to serve a helicopter link, even with the account that for shock Mi-24 (in armies received the nickname "Crocodile"), fighting loading Mi-8 – generally drag uncontrollable aviation rockets (PLANK BEDS), rather technical office – 20-25 people.

As to other direction of approach – to Palmira to speak about it while early. Otherwise in the back there will be a considerable group, and cut with it communications fighters can at any time. So it is very remote task.

– It is obvious that besides the main air base in Latakia airfields for basing of army aircraft are necessary still, – the director of the Center of studying of the countries of the Middle East and Central Asia, the colonel of a stock Simeon Bagdasarov speaks. – Not with such and the simple opponent we faced on the Syrian TVD – he is able to maneuver, be arranged under a situation. Generally – is at war very competently.

Therefore, besides additional links of helicopters, in my opinion, it is necessary to throw long-range and jet artillery with the good personnel. Recently armoured parts of the Syrian army sustain rather serious losses as the western sponsors of Islamists – katarets and саудиты – threw them PTRK in enough. I think that the Russian artillery nevertheless in Syria will tell after a while the word is dictate conditions of the Syrian war.

As to a situation as a whole while, unfortunately, to speak about strategic successes it is not necessary. Open and there were some sites of Syrian-Turkish border which conduct to Aleppo and to other cities, for example, to Salma about which storm what month is reported. Not released there are also suburbs of Damascus. Are not looked through yet and prospects on cleaning of Idliba of Islamists.

On this background it is necessary to pay attention that Kurdish formations under the aegis of the USA (about the coalition created by States «Democratic forces of Syria» where they were going to send 50 members of spetsnaz, read in a "joint venture" material – the Pentagon "Vulcan Evfrata" woke) prepare for storm Ayr-Rakki – the capitals of YOKES. They already took over the control of Hasaka-Houl Highway, ways of supply of YOKES from Iraq. In my opinion, unfortunately, these forces will manage to take earlier the capital of YOKES, than Assad’s armies to smooth out Aleppo. Why "unfortunately"? Because the success of operation on the earth seriously influences political negotiations in Vienna.

"Joint venture": – How you consider, there is a chance operatively to beat off at fighters Palmira, to receive a trump at negotiations in Austria?

– It is the extremely complex challenge. How many time the Syrian military leaders promised to deblock air base Kuveyras or to close "windows" from Turkey? But while any of the declared tasks is not executed. Moreover, fighters often pass to successful counterattacks.

Therefore also we should get rid of the various propaganda and dramatized things not to be trapped. I will give examples.

On November 5 the message that representatives of 28 brigades of Free Syrian army from various regions of Syria will take part in negotiations with the Russian side in Abu Dhabi was widespread. In general number of a brigade – three-five thousand people. That is to us want to tell, what the total number of SSA in Syria exceeds 100 thousand fighters? From it at most there were only three-five thousand …

Or here the deputy minister of defense of Russia Anatoly Antonov again declared on November 4 that operation VKS in Syria will last before completion of approach of army of Bashar Assad on terrorists. And if tomorrow the Syrian army has to pass to strategic defense that cannot be excluded, we that, will not support it? War for a long time and we in it participate in Syria! Therefore it is necessary to do everything competently.

I will remind that when on the Iraq TVD пешмерга released more than one thousand square kilometers, and the Shiite militia took Tikrit, fighters of «The Islamic state» passed to strategic defense. And then know, what was? Islamists unexpectedly passed to counterattack and grasped Ayr-Ramadi being in 100 km from Baghdad. Then nowadays former chairman of the Incorporated committee of chiefs of staffs of the USA Martin Dempsey directly told: «We missed counterattack».

Operation of Aerospace forces of Russia in Syria began on September 30, 2015. Airstrikes are put by the group which is settling down in airfield Hmeymim where four fighters Su-30CM, twelve Su-24M bombers, six Su-34 bombers, twelve attack planes of Su-25CM, and also helicopters Mi-24 and Mi-8 are based. Protection of air base is provided by divisions of marines and paratroopers of Armed forces of Russia, group of special troops, and also the Navy ships in the Mediterranean Sea.

* Movement «Islamic state» by the decision Supreme the vessels Russian Federation from December 29, 2014 was recognized by the terrorist organization, its activity in the territory of Russia is forbidden.