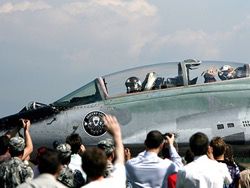 The parliament of Bulgaria approved signing of the intergovernmental agreement with Poland about repair and modernization of six fighters MiG-29. About it reports the Bulgarian agency Novinite.

The volume of the transaction providing, first of all, repair of RD-33 engines with extension of a guaranteed life, makes 12 million Bulgarian левов (about 6,14 million euros).

The decision of Sofia to use the offer of Poland instead of cooperation with the Russian enterprises was proved by more favorable offer, and also the risks connected with possible extension of the European sanctions against Russia.

On November 3 the Russian Federal service on military technically cooperation declared behavior of the Bulgarian authorities, decided to refuse cooperation with RAC MiG, counterproductive, having noted that such approach can negatively affect the relations of two countries in the sphere of defensive cooperation.

In the middle of October it was reported that RAC MiG can stop service of fighters MiG-29 of the Air Force of Bulgaria if that signs the agreement with Poland about repair of aircraft engines RD-33. The company reserved the right to itself to challenge legitimacy of the document «in view of obvious violation of our rights as the developer and the producer of planes», and also declared that declines all responsibility for safety of the equipment modernized in Poland.

Planes MiG-29 were received by Bulgaria in 1989-1990. In total from the USSR 18 planes MiG-29 (one broke in 1994) and four educational and fighting MiG-29УБ (one broke in 2012) were transferred. At present, by different estimates, the Air Force of Bulgaria have to 15 efficient cars of both types. In 2006 the contract was signed with RAC MiG on service and modernization of park of planes MiG-29 which was executed in 2009.