Georgia will get rid of the Soviet helicopters 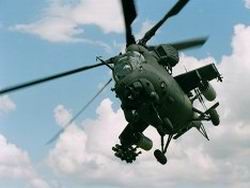 In armed forces of Georgia modernization of helicopter park during which Soviet "Mi" will be replaced with American "Mohawks" is begun.

All resources which it was planned to spend for repair, the contents and service of the Soviet helicopters, will be directed on updating of helicopter park, the Izvestiya newspaper reports. How many helicopters it is necessary to replace while it is not known. Except the American cars Georgia expects to get and the French helicopters.

On February 11-12 in Tbilisi NATO Military committee meeting after which the Minister of Defence of Georgia Irakly Alasany declared took place that the USA agreed to be sponsors of inclusion of Georgia since 2015 in Forces of fast reaction of North Atlantic alliance. According to the chief of the Georgian General Staff of general major Vakhtang Kapanadze, the help will be rendered by Americans both in respect of providing Georgia with equipment, and at expert level.

Earlier in the Ministry of Defence considered possibility to get rid and from tanks T-55 and T-72, having utilized or having sold equipment for borders of Georgia.