Georgia will receive the American help by helicopters 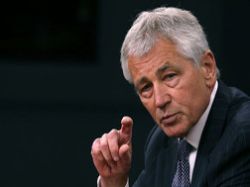 The chief of the Pentagon Chuck Heygel, having arrived to Tbilisi with two-day official visit, discussed with the head of defensive department of Georgia the possible help of the United States in equipment of the Georgian army, including by military transport helicopters and promised to do the utmost for the accession of the Caucasian country to NATO. However, independent experts doubt realness of these plans after the Welsh summit where to Georgia refused granting "road map" according to the accession to alliance.

Heygel arrived in Tbilisi directly from Wales. The head of the Pentagon and the Minister of Defence of Georgia Irakly Alasany passed in a yard of a building of the Ministry of Defence of Georgia on a red path before a system of a guard of honor, officers of the General Staff, military attaches of the foreign states and the American instructors who are taking part in preparation of the Georgian soldiers for sending to Afghanistan, and were removed for conversation confidentially.

Performance "an essential package of the strengthened cooperation with Georgia" which was approved the day before by NATO council became a subject of negotiations. "This package provided strengthening of defensive possibilities and increase of safety of our country" – Alasaniya told. In turn, Heygel declared that "package" provides "use of increasing possibilities in the defense sphere, strengthening of ties and compatibility deepening".

During the Welsh summit "the small summit" – a meeting of Ministers of Defence of alliance with colleagues from five countries recognized as "special partners of NATO" took place. It is Sweden, Finland, Australia, Jordan and Georgia. "Development" of a special package" for Georgia was our priority in Wales, – the head of the Pentagon recognized. "As you are such faithful allies of America, we will make everything for execution of your dream of membership in NATO", – the American official drew an iridescent picture, without having explained, why in that case Georgia did not receive in Wales "road map" according to the accession to alliance.

Heygel thanked owners for "the significant contribution to the Afghan operation", and Alasaniya promised that the Georgian contingent will not leave Afghanistan at the end of 2014, and remains in the country for performance of new mission of "solving support", beginning under the American patronage.

Heygel significantly noticed that during conversation in a bilateral format they in detail discussed a situation with the Georgian minister in Iraq. Probably, thereby he hinted at desire of the USA to connect Georgia to new overland operation in Iraq (if it after all begins) for reflection of attack of fighters of "The Islamic state" Baghdad. In 2006-2008 the Georgian contingent in Iraq was the third on number after the USA and Great Britain.

Not less attention of the party gave also to events in Ukraine: "We spoke about aggression of Russia and huge threat for the euroatlantic safety", – opened an essence of conversation of Alasany. In turn, Heygel urged Moscow "to disengage again armies from the Georgian territory", meaning Abkhazia and South Ossetia.

At this moment one of journalists asked the American minister, whether intend to execute the USA the agreement on sale of Georgia of military transport helicopters. "We discussed this question and spoke about what steps are necessary for undertaking Georgia to buy the American helicopters", – the chief of the Pentagon in a flowery style answered, without denying, however, possibility of delivery of military equipment. News about possible purchase of helicopters became the main subject of the Georgian mass media, but Heygel and Alasany on it did not express any more. The editor-in-chief of the military and analytical magazine "Arsenali" Irakly Aladashvili declared to "the Messenger of the Caucasus" that the agreement on purchase of helicopters is signed in 2012: "Presidents Obama and Saakashvili signed the contract on military and technical cooperation in Washington. Updating of park of helicopters was one of its points, but since then really is made nothing".

The former rector of Tbilisi diplomatic academy Joseph Tsintsadze in conversation with "the Messenger of the Caucasus" expressed doubt in advantage for Georgia most "a package of the strengthened cooperation", nicknamed "the gold card of NATO" about which Ministers of Defence of two countries so much spoke. "Perhaps, for Sweden or Finland it is really "gold" or "the diamond card", but hardly it will protect Georgia from Russia", – is sure Tsintsadze.