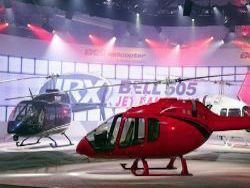 Demand for civil helicopters in the world is reduced

The world market of civil helicopters continues to be reduced. Decline in demand is in many respects caused by reduction of prices of oil and political conflicts. However, the greatest effect renders a natural turnover cycle of world fleets, analysts are sure, and its peak already passed.

Demand for civil helicopters in the world market is reduced. The tendency which began in 2014, proceeded and this year. Following the results of last year the number of the put civil helicopters in the world made slightly more than one thousand, having reduced in comparison with 2013 by 10 %. For the first three months 2015 falling of deliveries reached 18 %: from 230 cars in January – March, 2014 to 188 in the first quarter 2015. Data of Association of producers of aircrafts of aircraft of general purpose (GAMA) testify to it.

Deliveries of civil helicopters reached the peak in 2013. It was connected in many respects with hit this year of a cycle of replacement: fleets of many helicopter operators became outdated and their updating was required.

Besides the market was gradually restored after world crisis of 2008. These factors promoted that following the results of 2013 of all in the world about 1117 civil helicopters were put. It was most of all transferred to customers from the USA and China. On the third place by number of the put civil helicopters could leave and Russia, having bypassed Brazil and Canada.

To expect shortly growth of deliveries of civil helicopters it is not necessary. For the next year demand essentially will not change.

On forecasts of analytical agency Honeywell, in the current year, as expected, will continue grow the North American and European markets of helicopters, and also the Middle East and Africa – there even essential surge in demand is expected. As the driver of sales lungs one – and two-engined helicopters act. Nearly a half of universal demand for easy helicopters is necessary on such models, as EC130 and H125 from Airbus, Bell 407, Bell 505 and Robinson R66.

Falling of the prices for oil will make double impact on a condition of the market of civil helicopters. On the one hand, the low prices for oil and aviation fuel will positively affect demand and will stimulate sales. On the other hand, in those regions where oil is a basis of economic wellbeing, the low income of petrosale will lead to decrease in rates of economic growth, including to reduction of demand for helicopter equipment. Besides as one of the most big customers of helicopter equipment oil-extracting companies which because of falling of the prices for a resource expenses were compelled to cut down acted.

The negative role will be played also by political conflicts which brake economic development of a number of the countries. Constraining effect on development of the European market will render a prolonged economic crisis round Greece and delay of growth rates in Russia. Latin America will continue to show increase in demand above srednemirovy, but also it will be slowed down in connection with economic difficulties in Brazil.

Among the countries BRIKS only India as it is predicted, will show strong increase in demand for civil helicopters.

«Most likely, now we observe a certain natural cycle: old fleets were updated and the market came to a certain calm», – the editor-in-chief of «An air-transport review» Alexey Sinitsky considers. «Hardly helicopters became necessary to nobody, – the expert speaks. – This market will proceed and develop: they occupied a certain niche and it anywhere will not get to».