In the Kremlin commented on death Su-24 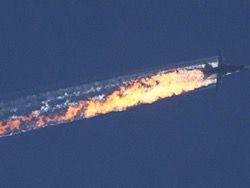 The press secretary of the president of Russia Dmitry Peskov declared that in the Ministry of Defence yet did not call exact causes of death of the Russian Su-24 plane, the correspondent to "Lenty.Ra" transfers.

«While for the plane crash reasons from the Ministry of Defence we did not hear any final statements. Let’s wait after all», – answered Sand a question of journalists of possible reaction of Russia on an event.

According to the official representative of the Kremlin, probably, the president of Russia Vladimir Putin will mention this question at a meeting with the king of Jordan Abdalla II which will take place on Tuesday, November 24, in Sochi. At the same time, emphasized Sand, «it is valid very serious incident», however to do conclusions, without having full information, it "would be incorrect". Thus he noted that that the plane was «in air space of Syria over its territory» is authentically known.

Earlier on Tuesday, November 24, the Ministry of Defence confirmed falling in the territory of Syria of the Su-24 plane of the Russian aviagroup which is based on airfield Hmeymim. According to military department, the bomber all the time of flight was only in air space of Syria. «The plane was at height of 6 thousand meters. The destiny of pilots is specified. According to preliminary data, pilots managed to catapult», – military reported.

The front Su-24 bombers are a part of the Russian group (air brigade of special function), developed in Syria in airfield Hmeymim at the end of September, 2015. Since September 30 the group participates in operations against the radical Islamic groups forbidden in Russia «Islamic state» and «Dzhebkhat an-Nusra».