In Tuva fragments of Mi-8, the missing almost

are found a year ago 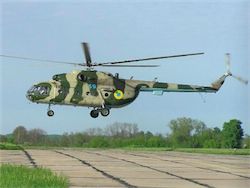 Military, allegedly, found fragments of the last year which have gone in October in Tuva of the Mi-8 helicopter onboard which there were 12 people. About it to journalists gave in Management of the press service and information of the Ministry of Defence of the Russian Federation.

As specified TASS in the Ministry of Defence, around 15:30 Moscow time on August 7 at performance by crew of the Mi-8 helicopter of association Air Force and air defense of the Central military district of planned flight around 90 kilometers North to the west of Kyzyl pilots found on the earth helicopter fragments, with high probability belonging to the Mi-8 helicopter which has gone on October 10, 2014 of Tyva Avia airline. Right after the report of pilots on a radio communication on airfield about the found remains of the helicopter, services of regional government of the Ministry of Emergency Situations of the Russian Federation on duty were informed.

With approach of light time of day to a place of detection of fragments the land search and rescue team will be directed.