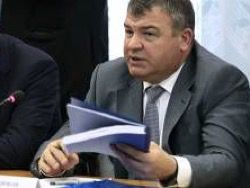 The odious ex-Minister of Defence Anatoly Serdyukov only quite recently amnestied in the case of drawing of a damage to the state budget for the sum of 56 million rubles, went on increase. Now to it entrusted control of the enterprises of the Russian aviation industry, Rostekh state corporation, with annual revenue of 350 billion rubles.

To the same river

Appointment was preceded occurred literally for some weeks before by hasty changes in structure of management of state corporation.

«On October 1 for any reasons – what it is exact, it is not known, positions of the so-called industrial directors who are responsible for the concrete directions of industrial development of the country» were entered, – approve sources in the aviation sphere.

The same sources say that the order on appointment was signed at the beginning of a month, but for the unclear reasons "Rostekh’s" head Sergey Chemezov did not hurry to publish this fact. So for those who in a subject, Serdyukov’s "emersion" by surprise did not become.

To bleach until white

Attentive to details the federal press pays attention to one more strangeness. In two weeks prior to reincarnation of the odious ex-minister, military and investigatory management of SK Russian Federation closed the last criminal case Anatoly Serdyukov was which person involved. To it made that it «used the powers contrary to interests of service» in a question of deliveries of furniture in the Krasnodar presidential cadet school. These deliveries, according to the version of the investigation, in defiance of the legislation were carried out through the charity foundation headed by Anatoly Serdyukov.

Almost all 2013 went a peculiar Ping-Pong between GVSU SKR and prosecutor’s office. One department took out refusals in initiation of legal proceedings, and another challenged these refusals in court. Eventually this year the staff of the Ministry of Defence involved in providing military schools, mass amnesia affected: any did not remember, that on this direction there were any violations.

To tell that appointment of the cut a poor figure minister was apprehended in bayonets – means, to tell nothing. In the State Duma were simply revolted. Here only some comments of politicians.

«This very unsuccessful appointment, at all in a trend, at least, not that is necessary for the domestic industry», – the deputy head of the Duma committee on economy Mikhail Yemelyanov.

«Serdyukov’s increase is a call for me, a justice call, a call to justice, a legality call, a call to all citizens of Russia … Let Serdyukov puts carrot, and here it should not be. Let’s understand now as it in general there got», – one of leaders of the CPRF Valery Rashkin.

Moreover, according to Rashkin, communists intend to initiate check of legitimacy of appointment of the ex-minister to a new position.

«From the point of view of the voter, the citizen, such return of the person which suspected of financial frauds, back in structures of public industries – is unacceptable», – the vice speaker of the State Duma Igor Lebedev declared.

And here in the Kremlin to scandalous appointment reacted extremely chilly and avariciously. Dmitry Peskov referred to not possession of a subject because of work in AP, instead of in "Rostekh", having declared that "Rostekh" is the separate structure which is not relating to AP and the Kremlin.

Social networks and blog sphere fill «with idle talks in a system» on a subject of «the new horizons» and «flights waking or sleeping», with an obvious hint on the aviation industry and it «effective managers. Users amicably bury aviation industry and ретвитят "phototoad" with a shot of the falling plane from a comic series «Abrupt dive». «Let’s fly now on stools!», – one of follover in Twitter ironically exclaims, hinting at the old nickname Serdyukova ("Taburetkin") which has appeared because it came to the Ministry of Defence from furniture business.

The special discontent in users of social networks was caused by that fact that Anatoly Serdyukov is again put to military industrial complex. Not the secret that after its resignation only the lazy did not criticize a situation in army, writing off all shortcomings on fruits of the guide of the ex-minister.

Anatoly Serdyukov for a domestic official Olympus a figure sign. But not owing to any special achievements on occupied posts, and absolutely on the contrary. In the autumn of 2012 the minister of that time became a witness in resonant case of plunders in "Oboronservice". Accused on business passed the head of the department of the property relations of the Ministry of Defence of Evgeny Vasilyev of that time. These two surnames – Serdyukov and Vasilyev, – for a long time became society corruption symbols in the highest echelons of power.

At the beginning of 2013 the Head military investigatory department brought criminal case under article «abuse of powers of office». By a consequence it was established that the Ministry of Defence actively promoted not to increase of defense capacity of the country, and development of business of the son-in-law of the minister – Valeria Puzikova.

In the autumn of the same year Sledk the Russian Federation brought concerning Anatoly Serdyukov criminal case about negligence (a part 1 of article 293 UK). As a result of actions of the former minister the damage for the sum more than 56 million rubles was caused to the state. Lost the state budget because of Anatoly Serdyukov’s oral order about construction of the road to the island School in the Astrakhan region where "Zhitnoye’s" belonging to already mentioned son-in-law the minister Valeria Puzikova the recreation facility settles down so much.

And to heat to the former minister plank beds, but spring of the following, 2014, Serdyukov was amnestied by the Constitution day and business against it was closed.

However the reputation of the ex-official was killed" seriously and as it seemed, for a long time. As to Evgenia Vasilyeva, it was lucky less. It nevertheless was condemned for five years, but let out on UDO in the summer of this year, having stayed the most part of term instead of a standard regime penal colony under house arrest. That caused the whole squall of indignation in society, in mass media, in social networks and in the Duma.

Perhaps, the text would be incomplete without the characteristic of that "kitchen garden" which entrusted the compromised ex-minister. Monitoring of its aviation assets becomes the sphere of responsibility of Anatoly Serdyukov in Rostekh state corporation. Subholdings «Helicopters of Russia» treat them (uniting all vertoletostroitelny enterprises of the country), the Incorporated dvigatelestroitelny corporation, "Tekhnodinamika". The total annual sales of the structures concentrated under the new appointed industrial director make about 350 billion rubles.

By data "News", the former minister will supervise activity of three companies: The incorporated dvigatelestroitelny corporation (ODK), "Tekhnodinamika" and concern «Radio-electronic technologies» (KRET) – all of them are engaged in production of units and systems for the aviation industry and military industrial complex.

However, Mr. Serdyukov for "Rostekh" of people not new, and this glade well is familiar to it on experience the head of the supervisory board from 2007 to 2012. And after leaving from this position for all obvious reasons, communications did not break. To strengthen knowledge of specifics of this work the position of the adviser of the first deputy the general director of corporation which the ex-Minister of Defence occupied recently helped also. However, calm in the state corporation press service, Anatoly Serdyukov will not participate in "Rostekh’s" governing bodies.

The purchase history for budget money directly from manufacturer in the American "Seattle" 50 "Boeings" put then in operational leasing to "Aeroflot" became one of "Rostekh’s" most considerable contracts. The agreement was signed with Boeing five years ago, at Serdyukov – the head набсовета. Cost of the contract of operational leasing made 3,5 billion dollars, and the general term of contract of 12 years.

As we see, "Rostekh" – at all a shop trading in pins, here operate with the solid sums. And that put the amnestied ex-official to so serious money, at least, guards. After all 350 billion rubles are scarcer than hen’s teeth, and that corrupt officials happen former, it is trusted somehow not so.

During Anatoly Serdyukov’s finding on a ministerial post the state budget, according to the investigation, lost not only 56 million rubles. Much more considerable contribution in plunder of the budget was brought by his subordinates. In particular, head of the department of the property relations of the Ministry of Defence of Evgeny Vasilyev of that time. The proved damage from illegal activity of the last at nachalnike Serdyukove exceeded on different criminal cases of 190 million and 1 billion rubles.