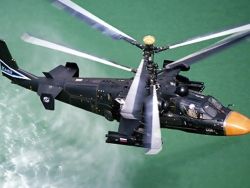 The fleet of the Russian Military and air forces this year was filled up by more than 100 new helicopters, including 14 fighting vehicles of Ka-52 "Alligator", the commander-in-chief of the Air Force Victor Bondarev reported on Wednesday.

«This year we receive 100 with superfluous helicopters», – he told during visit of Progress Arsenyev Aviation Company which is included into holding «Helicopters of Russia», reports ITAR-TASS.

In particular, according to the commander-in-chief, "Progress" in 2013 completely carried out a state defense order task on delivery of the Air Force of Ka-52 helicopters.

«The plant without failure finished a task of this year, and all 14 helicopters will be put in armies», – Bondarev told.

Also added that Ka-52 arrive on arms of aircraft of East, Southern and Western military districts.

According to the commander-in-chief, in 2014 rates of receipt of new equipment will remain.

«We in shops saw today cars from reserves of 2014. The holding «Helicopters of Russia» and plant make to us the promise that next year we will be rhythmically, quarterly to receive helicopters, – he told. – Not in the end of the year, and, since March the first six helicopters, and then quarterly – on three-four cars will go. Pilots will start them to master with March».

Let’s remind, it was a few days ago reported that in three years in Russia tests of the new version of the Mi-28HM helicopter which now is actively developed by holding «Helicopters of Russia» will begin.