On the Russian base in Armenia created a squadron of helicopters 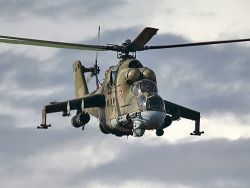 In Erebuni’s Armenian airfield near Yerevan where the aviagroup of the 102nd Russian military base is deployed, it is decided to create a squadron of helicopters.

Before on arms of our aviation group in Armenia the squadron of fighters MiG-29, carrying out fighting problems of antiaircraft defense in interests of the CIS air defense incorporated system consisted. With the advent of here army aircraft – helicopters Mi-24P, Mi-8МТ and Mi-8СМВ – possibilities of cover of important objects from air and an operative transfer of divisions and cargoes only will amplify. Rotary-wing equipment plan to involve, in particular, for aviation support of armies and transportation of soldiers and officers of the Russian military base on the Republic Armenia territory.

The flight and technical structure of air base has already training the medical and flight commission and land preparation then helicopter pilots started flights. Now the management of a squadron is engaged in a slazhivaniye of crews and ensuring flight preparation of pilots on the basis of command of the Air Force and air defense in Rostov-on-Don.

Delivery of rotary-wing cars to Erebuni’s airfield will carry out within a year.

Let’s remind that our 102nd military base with a staff the city of Gyumri remains in Transcaucasia, at least, till 2044. Originally army objects of the Russian Federation "registered" in some regions of the republic under the Russian-Armenian contract from 1995. The agreement automatically продляется for the five years’ periods if one of the parties does not decide to leave contracts.

Such it is hardly possible. The matter is that Russia and Armenia are included into the CIS air defense Incorporated system, have joint group of land forces. In the same Gyumri on fighting watch there are Russian surface-to-air missile systems S-300, and in the suburb of Yerevan on readiness for take-off constantly there are crews of our front fighters MiG-29.

Some thousand soldiers and the officers, which Ministry of Defence of the Russian Federation sent to Armenia, cover our country from the southwest direction. At the same time this army group helps to provide safety friendly to us the states. Therefore long stay of the 102nd Russian military base in Gyumri is equally favorable both to Moscow, and Yerevan.